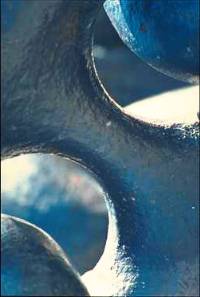 It looks like a baby buggy, but if fact it's a high tech listening tool for keeping bridges safe.

According to DIAL engineer Mark Hendeson, "Concrete bridges are constructed with a mesh of reinforced steel within the deck. Over time, water and other corrosive agents can cause the steel to deteriorate. When this happens portions of the bridge may separate into layers and eventually lead to problems ranging from an annoying pothole to serious structural damage."

The traditional (and inexpensive) way to tell if separation has occurred involved the use of a metal chain dragged across the concrete. Solid concrete produces a clear, ringing sound, areas while separations cause the moving links to emit a dull rattle.

The problem with this technique according to Henderson is, "Traffic and other road noise, or even an operator's sinus problems, often can affect the interpretation". More sophisticated techniques such as ground-penetrating radar can be used but tend to be very are expensive and time consuming.

'HollowDeck' propels the chain technique into the 21st century. It has a series of chains attached to a metal bar that drag across the concrete surface, a microphone and amplifier then send sound-generated data to a computer also housed in the three wheeled buggy. The computer then produces a visual map of the bridge with a clear picture of areas where damage is occurring.