Levitate Your Way Into Space 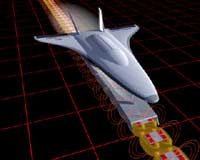 NASA's Advanced Space Transportation Program at the Marshall Space Flight Center in Huntsville, Ala., is developing magnetic levitation technologies that could reduce the cost of going to space so dramatically that anyone who can afford a luxury car could leave the planet.

NASA and industry partner PRT Systems Inc. of Park Forest, Ill., are teaming with an amusement ride manufacturer and a British university for research into magnetic levitation -- or maglev -- that could help launch spacecraft into orbit using magnets to float a vehicle along a track.

"Magnetic levitation is a promising technology for future space transportation as we build the highway to space," said Garry Lyles, manager of the Advanced Space Transportation Program. "The most expensive part of any mission to low-Earth orbit is the first few seconds -- getting off the ground. Maglev is a low-cost alternative for space transportation because it leaves the first-stage propulsion system on the ground."

At $10,000 a pound, current launches via the Shuttle are way too expensive for Joe Public, initial estimates put the maglev system at a couple of hundred dollars a pound, a person plus luggage could be in space for $50,000.

Just as high-strength magnets lift and propel high-speed trains and roller coasters a couple of inches above a guideway, a maglev launch-assist system would electromagnetically drive a space vehicle down a track. The carrier could be similar to a flatbed railcar. The magnetically levitated vehicle would catapult from the ground at 600 mph and then shift to a rocket engine to reach orbit.

"A maglev system is virtually maintenance-free because it has no moving parts and there's no contact," said Lyles. "It could help launch a spacecraft from a typical airport runway to low-Earth orbit every 90 minutes." A single maglev system is projected to work for 30 years.

Cutting-edge technology for maglev emerged through successful proof-of-concept experiments at the University of Sussex in Brighton, England. In a laboratory there, a 2-foot-long sled is propelled at 120 mph along a 20-foot electromagnetic track.

The track is actually an advanced linear induction motor that provides thrust, lift and the added advantage of guidance of the launch vehicle. Figuratively a rotary motor split in half and rolled out flat, a linear induction motor produces thrust in a straight line instead of by turning a shaft or gears. Motors for the experiment were developed by PRT and funded by Arrow Dynamics Inc. of Clearfield, Utah, an amusement ride manufacturer.

As part of a larger scale experiment in 1999, two tracks measuring 50 and 400 feet are planned in Huntsville. Design plans are scheduled to be finalized within two years for a 5,000-foot track capable of launching a 40,000-pound payload at a test site.