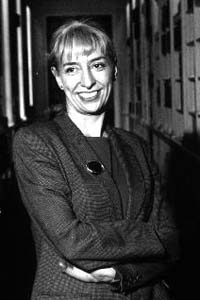 For the first time in its almost-two-hundred-year history, the Royal Institution of Great Britain has appointed a woman as its director. The prestigious scientific post will be taken up by Susan Greenfield, currently a professor of pharmacology at Oxford University.

Speaking from Oxford, Greenfield said: "The involvement of science and the work of scientists in the life of the community is greater than ever before. Scientists are gradually realizing the full extent of public enthusiasm for sharing the excitement and implications of the latest scientific discoveries."

Greenfield's credentials as someone able to bridge the gap between scientists and non-scientists - one of the main reasons the Royal Institution was originally established - are impeccable. A prolific writer and broadcaster, her books include Journey To The Centres Of The Mind: Towards A Science Of Consciousness and The Brain - A Guided Tour. She has a column in the Independent on Sunday, and will shortly be presenting a major six-part BBC2 television series on the brain and mind.