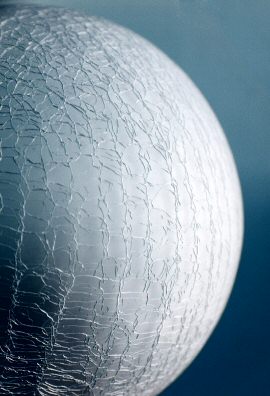 During the 1980s, as physicists began to discover just how weird our universe really is, some very spooky hypotheses were doing the rounds. Take, for instance, the "Strange Matter Hypothesis," which essentially claims that small blobs of quark matter called "strangelets," rather than nuclei, are the proper ground state of matter. Strangelet advocates argue that this has profound implications for the death of heavy stars, which they say do not resolve into neutron stars, but into much denser "strange stars."

Cosmological goings-on such as this wouldn't normally concern your average Joe, except that some researchers suggest that rogue strangelets could bombard the Earth and set off a chain reaction that would destroy the Earth in seconds. Although physicists assure us that there are very good reasons to believe that this would never happen, strange matter advocates still believe that this is not the end of the matter (so to speak).

The Earth is constantly being bombarded by cosmic rays that are comprised of the nuclei of elements produced in distant stars and they offered a convenient way for scientists in the 50s and 60s to become familiar with particles not normally found on Earth. These particles became known as "strange" particles, dubbed as such because they were comprised of hitherto unknown flavors of quarks (a fundamental particle, along with Leptons, from which all matter is made). Strange particles consist of a certain number of strange quarks, and the more they contain the greater the "strangeness." For example, a strange baryon consists of three quarks where at least one of these quarks must be strange. But while scientists agree that quarks do have three pair states in total, up and down, strange and charm, and top and bottom, it is still a bone of contention as to whether quarks can exist in a free state as they did just after the Big Bang.

One of the places that some scientists suspect free-state quarks may exist is in theoretical quark stars, or strange stars. A strange star is said to be composed purely of quark matter. To become a strange star, the gravity of a particularly large neutron star must be sufficient enough to transform the neutrons of its neutron-degenerate matter back into its constituent up and down quarks. Following from this, it is theorized that some of these quarks become strange quarks that make up strange matter, hence the name "strange star."

If strangelets really do exist, then a terrible catastrophe could be in the offing. The theory goes that strangelets would hit the Earth as cosmic rays usually do, but once the strangelet hit a nucleus on Earth, it would catalyze and convert the nucleus to strange matter, which would trigger a domino-like effect in which the whole Earth would convert into a steaming haze of strangelets. But this doomsday scenario is considered unlikely as scientists believe that both strangelets and nuclei are positively charged, and would therefore repel each other. They also contend that even if negatively charged strangelets did exist, we would have already seen the doomsday effect either here or somewhere like the moon, which is also continually bombarded with cosmic rays. But then again, maybe these rays are yet to reach our solar system for whatever reason.

It must have been speculative notions such as this - that strangelets existed but couldn't reach us - that re-ignited public fears about them just prior to the opening of the Relativistic Heavy Ion Collider (RHIC) in 2000. RHIC is an incredibly muscular piece of technology, with a collider beam that can reach 99.995 percent of the speed of light. And with a capability of colliding ions together at relativistic speeds to allow physicists to view matter that only ever existed just after the Big Bang, it's little wonder people were concerned. The media began bandying about ideas that RHIC could bring all manner of complex cosmological catastrophes to Earth's doorstep; ranging from black holes, quantum mechanical vacuums, and, of course, strangelets. But despite persistent media fear-mongering, none of these doomsday scenarios has occurred, and RHIC is yet to offer any news on the mysterious strangelet.

Not one to leave such mysteries hanging, researcher Mark Alford, Washington University in Saint Louis's assistant professor of physics in Arts & Sciences, together with collaborators from MIT and the Los Alamos National Laboratory, recently set out to discover the theoretical characteristics that may identify strange stars. One of the alleged characteristics of strange stars, says Alford, is its smooth surface relative to a neutron star, and the direct exposure of strange matter to the vacuum of space. Conversely, the distinguishing features of a neutron star are that its deeper and upper level crust is quite messy. According to one researcher, it's deeper layers have pockets of voids akin to; "Swiss cheese," covered with sheets and rods resembling that of "lasagna" and "spaghetti," all topped off with blobs of "meatball-like" thingies. Mamma mia, sounds delicious! But it's also just as likely that both neutron and strange stars have intricate surfaces, which may make them hard to differentiate, and the existence of strange stars may remain a mystery.

It was Alford's colleagues who proposed an idea for identifying strange stars. They hypothesized that if strangelets had certain properties, then they may exist as something more like a kaleidoscopic aura of matter rather than a "melon rind" (what's with all the food analogies?). "The idea was that the surface of a quark star might be as complicated as that of a neutron star, with a sort of crystalline halo or crust of strangelets," explained Alford. The team reckoned that if strangelets actually existed, then they would ideally have a preferred size. "If strangelets exist in reality, they will have a preferred size. If small strangelets are preferable, then big ones will split up into smaller ones. Conversely, if big strangelets are more stable, then small ones could fuse with other small ones - if they happened to bump in to each other - to make big ones," says Alford.

The team concluded that if strangelets preferred state was big, then the star's surface would be complicated, but if small, then strangelets would be evaporated from the surface to form the hypothesized kaleidoscopic, crystalline aura suspended in a sea of electrons. After taking into account surface tension and electrical forces, the team did indeed find that if the surface tension was below a critical value, strangelets did form complex crusts comparable to neutron stars.