Solar Car Challenge: Three Wins In A Row for Dutch 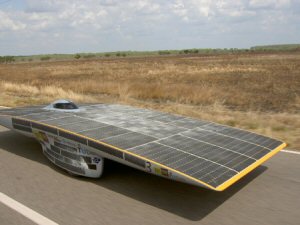 At least during the course of the Wacky Races Dick Dastardly looked as though he stood a chance, but at this year's World Solar Car Challenge the Dutch Nuon Solar Team gave no quarter. With two previous wins under their belts, the Dutch team was determined to clinch victory once more and prove their engineering superiority. As the race played out, team Nuon's streamlined solar car, Nuna 3 (pictured), led the way from start to finish, while breaking their previous world record time to boot.

According to organizers, the World Solar Car Challenge is supposed to be fuelled by the spirit of friendly competition, but it's hard to shake the feeling that the competitors are just as hot-blooded and ruthless as their fuel-injected Formula One counterparts. Secrecy is paramount and most of the cars are kept under wraps until the last possible moment when all cars go through a "scrutinizing" process just prior to the race.

The Solar Challenge is very different from other races. It originates from one man's desire to invent the most fuel-efficient vehicle possible. Danish born Hans Thostrup, himself a motor sport and sailing adventurer, first wanted to see how far he could make a vehicle travel on a liter of petrol. But somewhat surprisingly, oil company BP suggested an Australian crossing (from Perth to Sydney) using only solar power. In the inaugural race, the solar car "Quiet Achiever" reached Sydney in 20 days. Soon after this, the solar car crossings became a regular international race and the event eventually morphed into a state government backed race from Darwin to Adelaide held every two years. The dynamics of the solar challenge changed when a Swiss engineering school won the event in 1990, which is when the race picked up its "brain sport" label. From that point onward, teams of university engineering students have been vying for the coveted title of "world's fastest solar car." The winner of the 1999 Challenge was the Australian "Aurora" team, but since then it has been the Dutch team from Delft University of Technology (TUDelft) that have dominated. 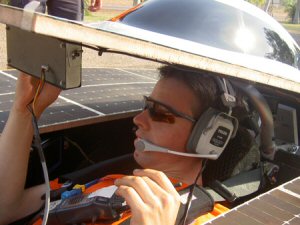 The Nuon team has had some serious help from some of the best in the engineering business. In the 2003 Solar Challenge, even before the start of the competition, Nuna 2 was already tipped as a hot favorite because of its sleek and streamlined design. Like its forerunner Nuna in 2001, Nuna 2 used advanced space technology provided to the team via the European Space Agency's (ESA) Technology Transfer Program, enabling the car to reach theoretical speeds of well over 100 miles per hour. The aerodynamically optimized outer shell consisted of space age reinforced plastics that kept it light and strong. The main body was constructed from reinforced carbon fiber and aramide, a material used in satellites. Nuna 2's shell was covered with the highest grade triple-junction gallium arsenide solar cells, also developed for satellites.

According to the team, the solar cells are the most important components of the solar car. And it's hard to disagree with them since the whole car seems to be made from them. "The more sunlight the cells convert in electrical energy, the faster the Nuna 3 can go. The efficiency of our solar cells are higher than our predecessors," explained the Nuon team.

Other improvements include a new shell design, lower overall weight and optimized aerodynamics. They also hint at having used advanced lightweight materials, so perhaps the ESA had a hand in that department as well. The team says that they have also spent time working on a "strategic optimization program that determines the ideal velocity, based on battery charge, solar intensity, clouds, the track and such."

Nuna 3 smashed all prior records during this year's Challenge. The Nuna 3's time for the 1877-mile journey was 29 hours 11 minutes with an average speed of 63.85 miles per hour. This stripped almost two hours from its predecessor's 2003 world record of 30 hours 54 minutes and broke the 62.15 mph average speed barrier for the first time. It is the third consecutive time the popular Dutch team from the University of Delft has been first to Adelaide in world record time. In the best traditions of boy-racers, Australian team Aurora came in second place after a bumper-to-bumper tussle with University of Michigan's car Momentum 112 miles north of Adelaide. However, event Director Chris Selwood summed up proceedings by saying that Nuna 3 had set the pace from the beginning of the event.

To borrow some sporting rhetoric for a moment, at the end of the day, win, lose or draw, all teams did their respective countries proud. Not only do students from universities around the globe have a chance to pit their wits against others, but they also have the opportunity to be a part of a worthwhile endeavor that seeks to find and perfect the use of clean energy sources. It is, additionally, a great way for kids to be exposed to science and technology early on in their lives. After winning in 2001 and 2003, the Nuna solar cars traveled around Europe visiting towns, schools and other public arenas. As they toured Europe it was clear that they captured the imagination of many children. So, to finish, here's another overused sporting phrase: "it is science, not any one individual or team, which is the winner here today."