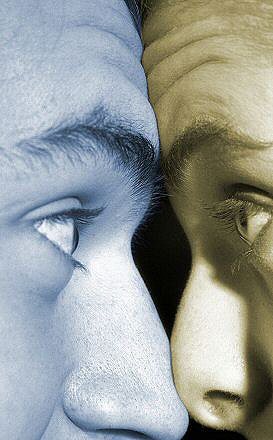 The scourge of racism has led to the marginalization of citizens and caused untold misery, suffering, and injustice. But social and political action along with improved education has left little room for bigotry to flourish. In fact, recent studies show that perceived racial differences are only skin deep, and that the concept of race is a baseless concoction. But if this is true, then why is there still a prevalent fear of the Other? Sure, these fears may not manifest in the same way that they used to, but nevertheless, some scientists believe that racism is a hardwired, instinctual function of the brain.

The idea that racism is a product of human evolutionary development must be a comforting thought for those who have a proclivity toward racist behavior. It's tantalizing because it absolves such people of having to be responsible for their bigoted worldview. Like a lawyer who attempts to get his client pardoned on the grounds of diminished responsibility, so might the racist blame evolution for their expressions of racism. While blaming evolution for racism may be a popular argument among creationists looking to discredit evolution, those looking to displace the guilt associated with their racial prejudice, and some scientists (whatever their motivation), what is the evidence for such a claim?

Humans love to categorize and class objects and people; it just seems to be in our nature. Think of the three most common ways in which the state, our neighbors, work colleagues, and even dating websites categorize people: age, sex, and race. While many people may be hostile toward being pigeonholed on principle, because it's a dehumanizing practice, the process of categorization is itself not inherently racist. Rather, it's the generalizations linked to such classifications that ultimately leads to racial stereotyping. Racial stereotyping has produced systemic racism of a type that many people may not be aware, because it is racism created through lazy thinking, or no thinking at all. Time and again researchers have shown that racism is still present in this insidious form, with perpetrators either ignorant of their prejudices, in denial of them, or are savvy enough not to advertise their racist views.

In one study, researchers from the University of Chicago found a link between police force size and whites' fears of crime in areas where blacks had a significant presence. The researchers claimed that a significantly increased police force - often as much as 15 percent larger - in neighborhoods where blacks made up to a quarter of the population was linked to whites' fears of crime. Another study on racial biases among doctors, published in Springer's Journal of General Internal Medicine in August of this year, is equally revealing. Interviewing 220 doctors from four academic medical centers in Boston and Atlanta, Alexander Green, from the Harvard Medical School, found that doctors revealed an unconscious, or "implicit," preference toward treating white rather than black Americans. Using Implicit Association Tests (IATs), Green found that doctors unconsciously stereotyped blacks as less cooperative, and more troublesome to treat. "Implicit biases are primarily unconscious and do not imply overt racism," explains Green. "They do however remind us that implicit biases may affect the behavior even of those individuals who have nothing but the best intentions, including those in medical practice."

Many a commentator has heralded the Internet as the great equalizer between peoples, irrespective of race, color, or creed. But Northwestern University's Eszter Hargittai, author of "Whose Space: Differences Among Users and Non-Users of Social Network Sites," argues that cyberspace may be no different to real life when it comes to racial identity. "Everyone points to that wonderful New Yorker cartoon of the dog at the computer telling a canine friend by his side that 'on the Internet nobody knows you're a dog,'" says Hargittai. "In reality, however, it appears that online actions and interactions should not be viewed as independent of one's offline identity."

Hargittai's foray into cyberspace revealed that a person's choice of social networking sites (SNS) is apparently related to their race, ethnicity, and their parent's education level. "That race, ethnicity and the education level of one's parents can predict which social network sites a student selects suggests there's less intermingling of users from varying backgrounds on these sites than previously believed," says Hargittai. The study, published in the Journal of Computer-Mediated Communication, shows that Facebook is the SNS of choice among whites, Hispanic students prefer Myspace, and that Asian and Asian-Americans are less likely to use Myspace, and instead use the less-popular Xanga and Friendster. Hargittai's findings fly in the face of intuitive ideas that the Internet breaks down racial, ethnic, educational, and economic barriers, and may in fact contribute toward a two-tier system. "In a two-tier system, some college students cultivate lots of networks and social capital while others benefit considerably less from this important part of the college experience," says Hargittai.

That such apparently unconscious racist thoughts and actions prevail throughout society seems to suggest a solid case for hardwired prejudice. That is, while the bad old days of an overt "whites only" policy could be dismissed as consciously constructed segregation, more recent types of racism seem to be "unconscious," below-the-surface manifestations. But do these cases of unconscious racism suggest that racism is a product of evolution?

The answer is "no," for a number of reasons. If people are looking to find some kind of ancestral, genetic reason for their prejudice - as some scientists did as late as the end of the last century - they're going to be very disappointed. Referring to research conducted by the evolutionary psychology founders John Tooby and Leda Cosmides, scientist and author Matt Ridley, author of Nature Via Nurture, writes: "Back in the African Stone Age race was worse than useless as an identifier, because most people would never have met somebody of a different race. Noticing people's sex and age, on the other hand, would make good sense as these were reliable if approximate predictors of behavior." The upshot of all this, says Ridley, is that Tooby and Cosmides were puzzled that "race should keep popping up as a natural classifier," when only the ability to discern age and sex are likely to have been the result of evolutionary pressures, if at all.

In fact, fears and anxieties associated with racial prejudice are learned behaviors, and not genetic. As one study conducted by Princeton University researchers Mary Wheeler and Susan Fiske shows, racial prejudice often arises from negative encounters with another race and these negative experiences are then generalized toward the whole race. "We react that way to harmless strangers of another race - unless we trouble to think of them as unique individuals," says Fiske. From the functional magnetic resonance imaging (fMRI) studies that they've conducted on the amygdala, Wheeler and Fiske argue that this kind of prejudice only occurs when people are "thinking about the faces [of other races] categorically and superficially." Wheeler and Fiske accept that we all have a tendency to categorize strangers, but this shortcut can be overridden with a little extra thought. "We think this way about strangers on a bus. But the amygdala and stereotype response depends on exactly how you think about your seat-mate on the bus," says Fiske.

The current trend in thinking is that racial prejudice can be reversed as a result of greater social integration with people from other races. Researchers from Harvard University say that while the group or tribal "pull" may have evolutionary roots, it is unlikely that this pull is related to race. "Our cultural surroundings tell us about the identity and qualities of other social groups, and this may be linked to an evolutionary predisposition to learn to fear members of social groups other than our own." The Harvard team doesn't factor in racial prejudice as an evolutionary trait for the same reasons that Tooby and Cosmides don't, which makes them optimistic about curbing racial prejudice, claiming that the "predisposition to fear members of another race may be changed by close personal contact."

Supporting these findings is the claim that teaching children about racism early leads to improved attitudes toward racial fairness and equality. University of Austin at Texas researchers claim that educating students, aged between 6 - 11 years of age, on "non-violent" topics such as racially biased hiring practices and racial segregation led students to value racial fairness more than those children not exposed to such lessons.

It seems that society is gradually turning its back on early scientific rationales for racism, as we begin to realize that we are not as different as we once thought, and that categorizing people by race is not inevitable.

Related articles:
Eeew!
Is Subconscious Perception the Root of All Evil?
Mirror Neurons Show Their Xenophobic Side