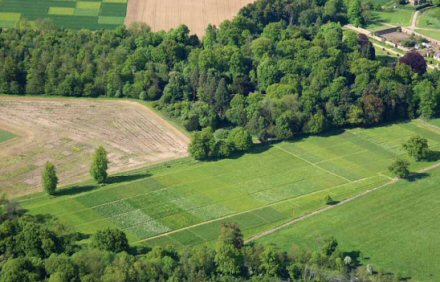 Apparently, watching grass grow isn't quite as boring as you may expect, and can, in fact, be downright fascinating. This is especially true if you happen to be one of the many ecologists eagerly anticipating the arrival of The Park Grass Experiment's 150th anniversary celebrations, which will be held at Rothamsted Research later this month. No, The Park Grass Experiment is not an initiative aimed at developing hallucinogenic substances for outdoor music festivals, but is in fact the world's oldest ecological experiment. The Park Grass Experiment was set up by John B. Lawes and Joseph H. Gilbert in 1856, in a field at Rothamsted Research in Hertfordshire, England, with the intention of providing answers to pressing agricultural questions of the day. But since then it has become more than the sum of its parts, and over the last 150 years researchers studying the ecology of Park Grass have elicited invaluable data regarding natural selection and biodiversity. To further mark this auspicious occasion, a review - "The Park Grass Experiment 1856-2006: its contribution to ecology" - has been published in the British Ecological Society's Journal of Ecology.

As with many of the greatest moments in science, some of the most significant findings from Park Grass were uncovered by accident. As mentioned earlier, Park Grass began as an experiment designed to test agricultural theories, such as observing the effects of certain fertilizers and manures on hay yields. According to the review, Park Grass was relatively flat, had been in grass for approximately 100 years up until 1856, was slightly acidic (pH 5.4-5.6) and had a poor nutrient status.

But researchers soon noticed that over time their agricultural tests had a significant influence on the botanical and ecological composition of the 2.8 hectare field. It was this observation that led to Park Grass becoming the longest and arguably - considering the current ecological plight we now find ourselves in - the most important scientific study ever conducted. Not only is the field's incredible array of flora beautiful to look at during the spring, but some of what we are observing is most likely representative of flora that was growing there hundreds of years ago.

The uniqueness of The Park Grass Experiment, aside from its longevity, becomes clearer when the full range of ecological investigations are taken into account. And the review's authors write that over 170 publications have arisen from the experiment to date. But even this does not fully convey the significance of the experiment, as the authors, all with backgrounds in the biological and agricultural sciences, explain. "Even though different investigators have pursued independent lines of enquiry, the cumulative result has the potential to tell us about more than the sum of the parts."

Some of the notable "parts" of the 150-year-old experiment are the results achieved by the differing treatments used on the plot, and how this affects species composition. The many treatments that the plot has been subject to often act as catalysts for various changes in soil compositions that have affected the "fragmentation of plant populations". The authors explain that: "the plant communities in the experiment are at dynamic equilibrium, where the average guild structure of the vegetation on a plot is determined by nutrient availability, particularly nitrogen, but also potassium, phosphate and lime, and is continually perturbed by climate."

Not only do nutrients play a significant role in affecting the composition of plot vegetation, but species richness can also be negatively correlated with total plot biomass and factors such as high soil acidity and low pH levels, say the authors. To this end, the Park Grass Experiment has shown how plant species richness, biomass and pH are related. These observations also confirm "pool size" and "competitive exclusion" hypotheses, where species richness within a community is dictated by the pool of available species together with biotic mechanisms, which in turn leads to the exclusion of some species from a community.

Collectively, and with a bit of good fortune, these findings, say the authors, will help understanding in regard to future ecological threats, and "recent debates on the functional role of species diversity in plant communities." Researchers working at Park Grass have been lucky, in a sense, as some of the treatments used on the plot have "produced two of the extrinsic impacts that threaten plant biodiversity in natural habitats," say the authors. The significance of this development is that it offers researchers a rare chance to study the long-term effects of extinction, and further relationships between nutrient availability and grassland biodiversity.

But the authors observe that not all studies are coming up smelling of roses. Researchers studying "evidence on chloroplast haplotype variation," found that: "population bottlenecks caused by drought on highly acidified soils may lead to loss of genetic variation through drift." This is potentially catastrophic, as genetic variation is needed in order for a species to survive as a whole. Nobody knows what the long-term consequences of these findings may be, but the authors say that: "genetic bottlenecks can tip a population into an extinction vortex."

Over 150 years, Park Grass has accumulated an extensive archive containing genetic material of many locally extinct populations. These samples have been considered useful in a retrospective study of the genetics of extinction, but the review authors highlight a worrying situation. "Significant numbers of species have been lost from all Park Grass plots. We can account for a proportion of these losses through the effects of nutrient treatments, acidification and the traits that make certain species more vulnerable than others, but it is worrying that models do not predict reductions in species diversity as large as those actually observed since 1856. The general message must be that we do not yet fully comprehend the causes of local extinction in plants, even where the losses are as well documented as they are at Park Grass." The authors argue that perhaps a more comprehensive study of the fungal and invertebrate populations will shed new light on this problem, as both the invertebrate fauna and fungi of Park Grass are little studied.

Over the years, Park Grass' various botanic mechanics have managed to collate an impressive amount of information that covers a wide range of ecological issues. They have shown that conventional field trials most likely underestimated threats to plant biodiversity from long term changes, such as soil acidification. They have shown a relationship between plant species richness, biomass and pH, as well as demonstrating how competition between plants can make the effects of climatic variation on communities more extreme. The plot itself is also noted as the first demonstration of local evolutionary change under varying selection pressures. No less important is the extensive archive of soil and hay samples collected over these many years. These samples have been a pivotal resource in tracking atmospheric pollution, which even includes the monitoring of nuclear fallout!

According to lead author Professor Jonathan Silvertown: "Park Grass has acquired new relevance for the study of fundamental ecological processes and for nature conservation. It has inspired new ecological theory and has helped ecologists to recognize the value of long-term experiments in ecological studies." The Park Grass Experiment continues to provide a staggeringly vast body of data that should, like a fine wine, eventually reveal its many complexities that will hopefully fill gaps in our understanding of Earth's perplexing eco systems. "These gaps notwithstanding," say the authors, "if ecosystems are like multidimensional jigsaw puzzles, then Park Grass is beginning to show us what the picture on the lid of the box must look like."