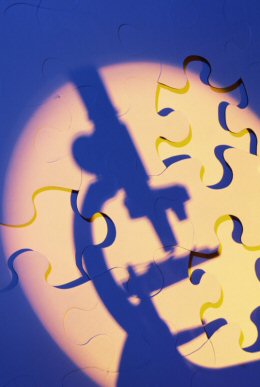 Whether you fear it, welcome it, don't understand it or think it an elaborate scientific conspiracy, "molecular nanotechnology" (MNT), or "molecular manufacturing," will have a profound and instantaneous effect on all aspects of industry and society. According to the Center for Responsible Nanotechnology (CRN), the new technology will hit us with all the destructive force of a speeding freight train, and "without adequate preparation and study, the effects could be dangerously disruptive." Yet more science hype? Perhaps. But in 11 essays, published by Nanotechnology Perceptions, a peer-reviewed academic journal of the Collegium Basilea in Basel, Switzerland, a number of highly regarded scientists cite past mistakes involving the introduction of a new technology without adequate public consultation and discussion. They also imagine a number of future nanotech scenarios that both fascinate and frighten.

In one of the essays, Singularities and Nightmares, David Brin offers some positive words on the potential benefits of nanotechnology, such as genome mapping while-you-wait. Perhaps, he says, this could be achieved conveniently by: "compressing a complete biochemical laboratory the size of a house down to something that fits cheaply on your desktop. A MolecuMac, if you will." But on the flip side, Brin makes your hair stand on end when he discusses the possibility of MolecuMac "hackers", whose ranks may include terrorists, despots or even angry, misunderstood, spotty-faced youths hell-bent on making your life a misery. "What are we going to do when kids all over the world can analyze and synthesize any organic compound, at will? What happens when this kind of [hacking] 'creativity' moves to the very stuff of life itself?" asks Brin.

Brin draws attention to influential people in society, such as Francis Fukuyama, author of The End of History, whose opinions are polar-opposite when it comes down to the issue of how much control and regulation there should be on technological innovation. Renunciation is the key word for this group, who believe that in order to save humanity from itself we must show restraint and curtail our creative juices for the sake of a better world. Brin says that authors such as Margaret Attwood and Michael Crichton often express: "outright loathing for the overweening arrogance of hubristic technological innovators who just cannot leave nature well enough alone." And what about former Sun Computers exec Bill Joy, who claims that the notion of an open society is dead? Brin says that Joy uses the Unabomber as reason enough for believing that: "our sole hope for survival may be to renounce, squelch, or relinquish several classes of technological progress." Phew. Brin is supportive of the social critics who shout when they see potential danger along the road, but he doesn't take the argument for containment as far as they do.

Most of the CRN fraternity seems to support the happy medium Brin refers to as "reciprocal accountability"; which advocates openness and accountability for technological development. Firebrand futurologist Ray Kurzweil sums it up when he says: "As the pace of technological advancement rapidly accelerates, it becomes increasingly important to promote knowledgeable and insightful discussion of both promise and peril." This is probably true of any new technology, but especially true in regard to nanotechnology, claims Mike Treder, the Executive Director of the CRN. Which is why, in August 2005, CRN formed a special task force comprised of experts from multiple disciplines whose job it is to: "develop comprehensive recommendations for the safe and responsible use of nanotechnology". But is a collaborative network of big-brained individuals really enough to affect how the future of molecular manufacturing will pan out?

The fact is, most other attempts at creating an effective policy to govern new technology have failed or never seen the light of day, because nobody can really predict what applications will stem from new scientific discoveries. And it is this freedom to create without prophetic insight that gets us all into so much trouble. So it stands to reason that there will be some who think humanity is not yet responsible enough to have that freedom. If history is anything to go by, perhaps the neo-luddites are correct and we must make technological sacrifices to save ourselves, as the halfway policy of reciprocal accountability just won't cut it.

It would be hard to imagine, for example, President Truman saying to the A-bomb team, "ok, boys, wrap it up, I'm losing sleep over this technology." And what about all those private institutes, whose doors are more often than not closed to public or government scrutiny? Just what will be in your face cream or toothpaste in the years to come? It's hard to imagine just how a nanotech policy would work in advance of any future applications. And who's to say that in trying to prevent the development of an undesirable application, a policy panel wouldn't also stifle positive innovation and progress? The industrial age seems to have a lot to answer for in regard to climate change these days, but would any of us have prevented the development of the internal combustion engine? Should we have turned our backs on electricity, because Harold P. Brown invented the electric chair? And would we have sacrificed radioactivity at the expense of some of the more advanced medical technologies? It's an unfortunate fact that very often the applications stemming from scientific discoveries are Janus faced. And unfortunately, no god has endowed anyone from CRN with second sight.

If nanotechnology proves to live up to all the hype, and personal nanofactories become the norm, it will be the most versatile and pervasive technology ever conceived by humanity. As such, it is unlikely that any meaningful guidelines could be imposed upon research and development for any future molecular manufacturing applications. While the CRN's Task Force is a welcome initiative, regulating potential applications once molecular manufacturing is in full swing will become analogous to bailing out a sinking boat with a sieve.

Read the essays at the Center for Responsible Nanotechnology.