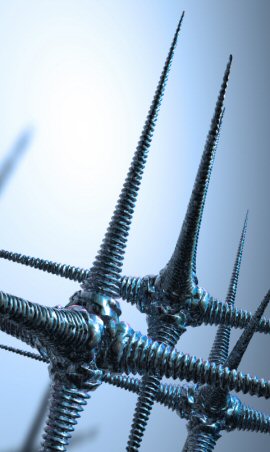 While one would hope that the slightly eccentric and amoral mad scientist is a thing of fiction, the possibility for scientists to get it wrong, or to lose control of their new creations, remains grounded in reality. History has shown us that the development of new materials and technologies has led to the disruption and destruction of countless lives. But what can we do? Nobody has a crystal ball.

All technology has a cost/benefit ratio, and the trick has been to predict what the likely risks will be. Who could have predicted the effects that the automobile industry would have on the environment? Who can confidently say what the fallout from current technologies like cell phones will be? We just have to accept that while we mostly enjoy the lives that science brings us, any exciting new technology could open up a Pandora's Box of horrors. But if we were to play psychic, which advancing field of science is likely to be the next asbestos or thalidomide? The smart money, without a doubt, would be on nanotechnology.

Nanotechnology is poised to be humanity's greatest technological achievement, or its greatest blunder. Once deemed some kind of grant garnering scheme unlikely to ever bear fruit, nanotechnology's profile has risen sharply of late. In fact, nanotech's preeminent rise is marked by the steady exodus of scientists from other fields of science into nanoscience. Scientists Andreas Barth, from the FIZ Karlsruhe, and Werner Marx, from the Max Planck Institute for Solid-State Research, recently stated that unless a groundbreaking discovery was made soon, high-temperature superconductivity would be a dead field within four years. The researchers laid the blame for the brain-drain on nanoscience, citing as an example the avalanche of papers relating to nanotubes compared to those about high-temperature superconductors.

One of those at the forefront of nanoscience is Keith Schwab, who earlier this year moved from the National Security Agency to take up the position of associate professor of physics at Cornell University. Schwab's area of research tests the very boundary (if there is one) between the quantum domain and the world of Newton's classical mechanics. Schwab has developed a nanomechanical device so small that it appears to be on the very edge of the two worlds, otherwise known as the quantum mechanical limit. The device is comprised of a sliver of aluminum on silicon nitride, and is 8.7 microns (millionths of a meter) long and 200 nanometers (billionths of a meter) wide.

It sounds small, but it's many times bigger than your garden variety quantum object. But Schwab's device still manages to push the limits set by Heisenberg's uncertainty principle. The principle states that the accuracy of simultaneous measurements of position and velocity of a particle is limited by a quantifiable amount. In this case, Schwab was able to get closer to this theoretical limit than anyone previously. The weird nature of quantum effects was made manifest as the team's observation triggered movement in the apparatus (a phenomenon known as "back action").

"We made measurements of position that are so intense - so strongly coupled - that by looking at it we can make it move," said Schwab. "Quantum mechanics requires that you cannot make a measurement of something and not perturb it. We're doing measurements that are very close to the uncertainty principle; and we can couple so strongly that by measuring the position we can see the thing move."

Spooky stuff. And Schwab wants to push things further, by building a nanomechanical device that exhibits superposition principle properties. In other words, a nano-device that can be in two places at once. "What's really neat is it looks like we should be able to do it," Schwab said. "The hope, the dream, the fantasy, is that we get that superposition and start making bigger devices and find the breakdown." Schwab's continued research on the mysteries that lie between the quantum and classical worlds is tipped to deliver significant advances in quantum computing, cooling engineering, communications and medicine. The list of applications could be unlimited.

There's no doubt that the development of micro-machines the size of a molecule will affect humanity as fundamentally as the Industrial Revolution did. But like any other technology, there are going to be some downsides, says The Nanoethics Group, an industry research and education organization. "If we had given foresight to how the invention or discovery of electricity, factories, automobiles, nuclear power and the Internet might affect people and society, we might have done a much better job in managing their negative consequences - such as economic disruption, urban sprawl, pollution, nuclear arms race and high-tech crimes," explained Patrick Lin, research director for The Nanoethics Group.

Groups such as Nanoethics are not saying that nanotechnology is something to be shunned, but they are saying that we should be on the defensive in regard to the possible use or misuse of nanotechnologies. While breakthroughs in nanotech might seem "really neat" to some, Nanoethics wants to actually think through the implications of such advances.

Importantly, concerns about nanotechnology have moved on from the fanciful bleatings of sci-fi obsessed doomsayers. Sure, the military, privacy and God syndrome anxieties are still relevant, but some of the real concerns expressed by scientists are a little less� well, exciting. Specific concerns about nanotechnology have come from no less than the UK Royal Society and Royal Academy of Engineering, who suggest that exposure to manufactured nano-sized particles may be detrimental to human health. Andrew Maynard, from the Woodrow Wilson International Center for Scholars, expresses similar concerns. Coupled with environmental worries, Maynard believes that nano particles could have an unprecedented reactivity to the human body, as their size, structure and purpose may easily evade the body's natural defense systems. "We need to understand both how harmful a substance is, and how much of it can get into the body, if risk is to be understood and managed," says Maynard.

Jared Diamond says that we can't always rely on technology to get us out of a tight spot. Diamond's argument summons up an image of humanity as a character using its fingers and toes in a desperate attempt to plug up the rapidly appearing holes of a bursting dam. Humanity has so far had enough appendages to plug up the holes created by our technologies, but what new technology will be available to save us if our nano-creations go haywire?