The Rhythm (And Melody?) Of Life 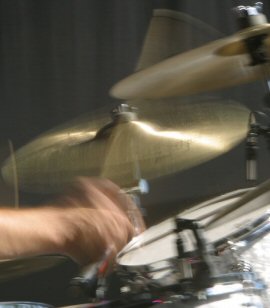 Listening to music of any kind is an integral aspect of our lives, but is it a necessary aspect? There may be lots of folks who live without music, but scientific research shows there is much more to music than there is to other so-called leisure activities that we consider enjoyable.

Last week, a Systematic Review from The Cochrane Library revealed that therapists would soon be adding music to their arsenal of therapies to treat depression. One neuroscientist, Alan Harvey, goes as far as suggesting that music has an evolutionary basis in regard to the development of the human brain and how this development has subsequently shaped civilization. It's a suggestion that may explain why so many of us have such a passion for music, and why music therapies, at least anecdotally, seem to show so much promise.

At the recent Annual Australian Neuroscience Meeting in Hobart, Professor Harvey told attendees that music is not just something that sounds nice, but may have practical applications in fields such as education and therapy. "And yet it still seems a bit peripheral in medicine and in education because it's viewed as a luxury, something that's an add-on," he said on Australian Broadcasting Corporation radio recently. "I think [music is] actually core to our whole being, because it was there in the very beginning of us. Our founder population had music as well as language."

According to Harvey's theory, music is more than just an art and is essential to our make up. And he contends that it just could be responsible for the development of the human brain. But does that mean that music is still an essential aspect of our existence today, or - assuming that music once did have an evolutionary purpose - is music just a redundant evolutionary throwback, as some of Harvey's critics suggest? Answering questions such as this will probably comprise much of the book that Harvey, from the University of Western Australia, is planning to write about his controversial theory. A book that will show, one would hope, how music used in medicine has some foundation in science.

As Harvey freely admits, much of what he is proposing is nothing new; he's just piecing together an idea that cuts across a number of fields, such as evolution, neuroscience, and anthropology. As such, there are other researchers looking into how music can reveal insights, or be of practical benefit, in their particular field. Interestingly, many researchers have found that both music and language are inextricably linked in a fundamental way. In a study released in September of last year, Northwest University researchers wrote that music training has an all-encompassing holistic effect on how the nervous system processes sight and sound. As a result, the researchers reasoned that music training might be more important to verbal communication ability than other techniques, such as phonics.

"Audiovisual processing was much enhanced in musicians' brains compared to non-musician counterparts, and musicians also were more sensitive to subtle changes in both speech and music sounds," said Nina Kraus, Professor of Communication Sciences and Neurobiology and director of Northwestern's Auditory Neuroscience Laboratory. "Our study indicates that the high-level cognitive processing of music affects automatic processing that occurs early in the processing stream and fundamentally shapes sensory circuitry."

By identifying these multi-sensory traits peculiar to musicians, the researchers found that brain alterations resulting from exposure to music training affects the same communication skills required for both speaking and reading. "Musicians have a specialized neural system for processing sight and sound in the brainstem, the neural gateway to the brain," said lead author Gabriella Musacchia. But it was already well known that the pathway for multi-sensory processing originates in the brainstem, which is an evolutionary primeval part of the brain that has always been considered unmalleable. But in an exciting new development, the Northwestern researchers found that the brainstem exhibits much more plasticity than previously thought, and that it acts as a common pathway for both music and speech.

As a result, the researchers suggest that musical training could enhance literacy skills among children, or even help those with literacy disorders. "The study underscores the extreme malleability of auditory function by music training and the potential of music to tune our neural response to the world around us," said Kraus. It also begs the question of whether there is some merit to playing music to newborns. Furthermore, the Northwestern study provides some hope in regard to Alan Harvey's music theory, which claims that our link to music has evolutionary underpinnings. Previous findings show that children with literacy disorders also have brainstem transcription errors, which would suggest that Harvey might indeed be on the right track.

We need look no further than the tone-deaf, or amusic individuals, for further evidence that there is certainly a link between music and language processing in the brain. While your partner or family member may sound like a cat being strangled in the shower, they're at least enjoying their own musical mayhem. For someone who really is tone-deaf - roughly 4 percent of the population - music cannot be perceived in the way it is intended, nor create music themselves - music's just noise, and they find no pleasure in it at all.

Using neuroimaging, researchers from the Montreal Neurological Institute of McGill University found that amusic individuals had more gray matter in particular regions (namely the right interior frontal gyrus and the right auditory cortex) associated with processing musical pitch than did people who are not tone-deaf. "Overall, behavioral evidence indicates that congenital amusia is due to a severe deficit in the processing of pitch information. However, until now, very little was known about the neural correlates of this disorder," says lead author Dr. Krista Hyde.

Interestingly, Hyde's findings on musical disorders are also linked to a literacy disorder. "Specifically, we found that tone-deaf individuals had a thicker cortex (or gray matter) in particular brain regions known to be involved in auditory and musical processing. This parallels with what has been observed in the learning disability dyslexia, in which the cortex is thicker in areas of the brain involved in reading ability."

From these studies we have seen that music is not only integral to human enjoyment, but that music is linked to fundamental aspects of our cognitive make-up. In this respect, the multi-sensory training that music provides us with can be considered a vital bridge between how we perceive our environment and how we communicate what we experience to others. Perhaps this is why enjoying music with others can often be such a unifying experience.

Related:
The Rain In Spain Falls Only In The Human Brain
A Penny for Your Qualia
Rare Hallucinations Make Music In The Mind
Fetuses Hear At 30 Weeks
Sexual Success And The Schizoid Factor