Metagenomics: The More The Merrier 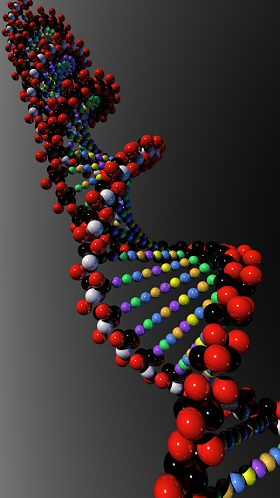 We've all become accustomed to reading about field researchers venturing into the jungle to observe species interacting in their natural habitat. Such research provides important holistic information regarding the role each critter plays in sustaining biodiversity and balance within a larger ecosystem. But the microscopic world is a very different story. In fact, scientists have barely scratched the surface as far as understanding the varied interactions and symbiotic relationships that the gazillions of microbes on our planet get up to.

Up until very recently, scientists were only able to study isolated cultured samples of microbes, which meant that they missed out on these important microbial interactions and their consequences. But now, with the aid of the relatively new discipline of metagenomics - described by some microbiologists as at least as important as the invention of the microscope - scientists are sourcing and analyzing vast microbial samples directly from the environment, which may lead to some rather startling possibilities.

The Committee on Metagenomics' recent report, entitled "The New Science of Metagenomics: Revealing the Secrets of Our Microbial Planet," doesn't beat around the bush, stating that metagenomics will forever change the way that scientists study microbes.

Metagenomics uses genomic analysis to analyze the DNA of entire microbial communities. "Metagenomics lets us see into the previously invisible microbial world, opening a frontier of science that was unimaginable until recently," said Professor Jo Handelsman, co-chair of the committee that wrote the report. "Shedding light on thousands of new microorganisms will lead to new biological concepts as well as practical applications for human health, agriculture, and environmental stewardship." But what are the mechanics behind metagenomics that make it so revolutionary, and what applications are we likely to see in the future?

Metagenomics manages to overcome the two biggest hurdles in microbiology - "unculturability" and the vast genomic diversity of microbial species - by looking at what the aggregate of microbes do in relation to the rest of their community. In this way, microbiologists will not only be able to glean information about previously uncultured microbes, but also what the sum functionality of a community of microbes actually is. "In the end, it may be possible to view ecosystems themselves as biological units with their own genetic repertoires, and to sidestep consideration of individual species," say the report's authors.

Currently, metagenomics involves extracting DNA from all microbes inhabiting a particular environment - just one sample may include genetic material from millions of microbes - and then identifying the various functions, genes and metabolic pathways in the sample. Such ambitious reverse engineering has only been made possible thanks to advances in bioinformatics, refinements of DNA amplification and a ramping-up of computational power. Samples are filed away in a library that is categorized by where the microbial genomes were found. "A metagenomics library is like thousands of jigsaw puzzles jumbled into a single box - putting the puzzles together again is one of this new science's great challenges," say the report's authors.

Researchers can piece together these vast, complex jigsaw puzzles to harvest copious amounts of data about any microbial community under study. They have already managed to reveal how some communities of microbes interact, and even find new antibiotics and resistance mechanisms. But because microbes are so fundamental to life, the report's authors predict that metagenomics will probably have a ripple effect further afield. "It is likely that as new biological strategies are brought to light, fundamental biological concepts will be affected," say the authors. "Basic ideas that organize biologists' understanding of the living world may need refinement in the face of greater understanding of how microbial communities function. New concepts of genomes, species, evolution, and ecosystem robustness will have effects beyond the specific field of microbiology." So, if you're toying with the idea of moving into the biological sciences, now seems to be the perfect time.

Importantly, metagenomics may shed light on how organisms not only receive genetic material from their parents, but also through other unrelated organisms; a process known horizontal gene transfer. If we had a better grasp of how this process worked in microbes, then we, ourselves, may be able to pass on and accept advantageous genetic material when required. Couple this ability with an understanding of how microbes are able to adopt countless strategies for surviving in extreme environments - temperatures, pressures, and pH levels - and we may be looking at the next stage of human development.

Delirious dreams of uber-humans aside, the committee suggests that for metagenomics to really take-off and be successful it will need the same support, energies and funding that the human genome project did. "Because the challenges and opportunities presented by metagenomics are so enormous, a major commitment equivalent to that of the Human Genome Project is both justified and necessary," says James M. Tiedje, co-chair of the committee. Committee members also propose that applications and findings derived from metagenomics would be further expedited if microbial research were broken down into site-specific projects. "For example, one large project could focus on the microbial community associated with the human body, while others could focus on soil and seawater, or managed environments such as sludge processing sites."

However researchers begin filling up microbial community databases, by all accounts metagenomics is set to change our understanding of a raft of issues concerning the biosphere. Indeed, the author's of the report have referred to metagenomics as the; "systems biology of the biosphere," adding that; "every process in the biosphere is touched by the seemingly endless capacity of microbes to transform the world around them. It is microbes that convert the key elements of life - carbon, nitrogen, oxygen, and sulfur - into forms accessible to all other living things."

Metagenomic research initiatives are envisioned to be projects where scientists and governments from across the globe share and immediately make public their findings. It will be interesting to see if this is the altruistic course that metagenomics takes.

Related:
An Outline of the Report
Horizontal Gene Transfer