Kinematics - The Language Of Invention 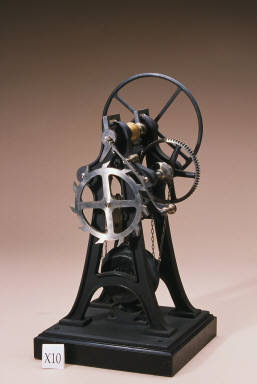 Machinery is so ubiquitous these days that it has almost become invisible to us - at least until our car or washing machine breaks down. For this reason it is impossible for us to appreciate the awe that surrounded the arrival of inventions such as the steam engine. But even less recognized is the development of the theoretical system of machine design notation known as kinematics that paved the way for such inventions, as well as creating the possibility for predicting future ones. Not so surprising, perhaps, given that many interesting and important aspects of kinematics have become "lost" down through the ages.

But now there is renewed interest in kinematics, as researchers involved in the development of anything from consumer electronics to biomechanical prostheses rediscover its value. At the center of this kinematics revival is Francis C. Moon, curator of the impressive Cornell Reuleaux Collection of Kinematic Models, who has recently released a book on the subject, entitled The Machines of Leonardo da Vinci and Franz Reuleaux: Kinematics of Machines from the Renaissance to the 20th Century.

In a nutshell, kinematics is the geometry of pure motion - an abstract theoretical approach to motion that does not factor in force or mass. Kinematics created a buzz among 19th century inventors, as it allowed them to predict how one machine component would transmit information or power to another.

Select aspects of kinematics have been preserved and remain central to machine design, physics, and mathematics, but since the nineteenth century, kinematics has slowly devolved into a hotchpotch of disconnected formulas that do no justice to the holistic approach to machine design for which it was originally intended. As such, Moon took it upon himself to not only show how the development of a rational machine methodology was probably more important than the invention of the machines themselves, but to provide an historical lesson in the importance of machine design synthesis.

Moon, Chaired Professor of Mechanical and Aerospace Engineering at Cornell University, Ithaca, New York, is no greenhorn when it comes to all things mechanical. As well as publishing five books prior to his latest effort, Moon is an elected member of the US National Academy of Engineers, and a Fellow of American Society of Mechanical Engineers (ASME). He has written over 140 papers, holds five patents and has been awarded the Humboldt Prize in 1988 and 2001.

Moon's book focuses much attention on Franz Reuleaux, the so-called "father of kinematics," who defined a machine as; "a combination of resistant bodies so arranged that by their means the mechanical forces of nature can be compelled to do work accompanied by certain determinate motions." Reuleaux believed that the way a machine worked in its entirety could be characterized by codifying the relationship between its fundamental constituents, and, furthermore, that this would in turn lead to a deterministic evolution of machines into the future.

It was Reuleaux's unique contribution of a machine syntax, or, as Reuleaux himself once said, "the language of invention," together with the many machine devices he built, that Moon finds so fascinating. "Using his symbolic system, along with his models, Reuleaux sought to deconstruct every machine that had been, or would be invented in the future, a Genome project for the Machine Age," says Moon.

The fundamental principle behind Reuleaux's machine grammar is the assumption that any machine component has built-in constraints relative to its neighboring parts. "The key to his classification was the recognition that every practical machine could be represented as a chain of kinematic constraints," explains Moon. "Each constraint involved a geometric relation between adjacent parts. A piston in a steam engine, for example, is confined to slide back and forth in the cylinder. Each link on a bicycle chain is constrained to rotate about an axis relative to the adjacent link and so on. Each constraint he represented as a symbol, letters with superscripts and subscripts."

It was an approach analogous to linguistics. An easy way of understanding Reuleaux's machine syntax is to consider a factory, say, as being comprised of a chain of symbolic words (adjoining parts) that create a sentence representing a complex assembly of machines. In this way, different factories would represent unique sentences.

Moon is the curator of a collection of Reuleaux's machines at the Kinematic Models for Design Digital Library (K-MODDL), located at Cornell University. "In his quest for an alphabet of machine devices, Reuleaux built the world's largest collection of machine components, a dictionary of sorts of over 800 models," says Moon. Reuleaux used the superbly crafted models to demonstrate his principle of how machines could be deconstructed to simple elements. Unfortunately, much of this 800 strong teaching collection - that Reuleaux used while at a technical university in Berlin - was destroyed during World War II.

Cornell apparently came by its 220 strong collection during the late 1800s, when Cornell's first president, Andrew Dickson White, met Reuleaux during his diplomatic service as American ambassador to Germany. When the K-MODDL first opened a few years ago, Moon said: "We're trying to bring the models back into use as they were originally designed. They were designed for classroom use. We will allow the user to walk around the models and even move them, see them move, and associate the [physical] models with the mathematical models."

According to Moon, certain aspects of kinematics have been lost; such as mathematical kinematics and rotary engines. Moon points out that the relationship between mathematics and kinematics has also been largely forgotten, noting that; "It is not generally appreciated that computers and calculating machines had their origins in kinematics." Moon says that whole industries - inspired by the calculating machines of Leibniz, Pascal, and, later, Babbage - were once based upon the premise of whether or not mechanisms could embody mathematical operations, which later culminated in the late 19th century Thomas Calculator, and the later 1930s analog kinematic calculator known as the differential analyzer.

Other kinematic mechanisms, such as the Peaucellier straight-line linkage, and the rotary engine, have become forgotten or lost in the context of modern engineering and electronics, says Moon. However, he believes that revisiting some of these long lost machines may be a worthwhile endeavor in our energy hungry societies. "In a world concerned with energy and the environment, Reuleaux's books and models, serve as a source of lost knowledge if there is ever a need to reexamine the rotary piston combustion engine using modern materials and control electronics." Food for thought, given that many of da Vinci's designs - including a helicopter, tank, and submarine - weren't seriously followed up until centuries later.

Related:
The Reuleaux Collection of Kinematic Mechanisms at Cornell University
Do We Need A New Kind of Science?
Mathematics In Crisis - Where To Now?
Can The 10,000-Year Clock Save Humanity?