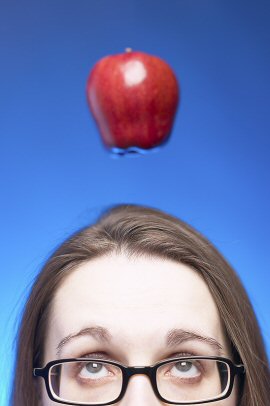 Do candles burn in zero gravity?
Yes. Astronauts like romantic dinners as well, you know. But a candle burning in zero gravity may not be as appealing to the eye as when they burn on Earth. When a candle burns in zero gravity there is an absence of what is called buoyancy-driven convection, and the oxygen and fuel vapor the flame requires is instead controlled by molecular diffusion. In simple terms this just means that in an environment where there is no up or down, the candle flame tends toward a spherical shape, and burns a lot slower. An additional feature of a zero gravity flame is that reduced fuel and oxygen levels mean that the flame is significantly cooler, and an almost invisible bluish color. Because of the slower burn rate, a candle that burns for 5 minutes on Earth might burn for 20-25 minutes in zero gravity. Hmm, "Candle in the molecular diffusion," doesn't quite have the same ring to it.

Was a manhole cover really the first man-made object in space?
Forget Sputnik; the first manmade object to make it into space was a manhole cover. Well, so they say. Citing the Smithsonian as his source, Australian scientist and science commentator Karl Kruszelnicki once wrote about a project dubbed Project Thunderwell, which took place in 1957. Thunderwell apparently consisted of drilling a hole 160 meters into the Nevada desert, placing a nuke in the hole, and sealing it with a manhole cover (or some kind of steel plate-like thingy) that weighed a few hundred kilograms. Kruszelnicki says that after the nukes were detonated, later analysis showed that the manhole cover attained a speed in excess of 6-times faster than escape velocity. This meant that the cover not only had the power to escape the Earth's gravitational field, but also the Sun's. However, other commentators claim that the film footage under analysis only showed one frame of the manhole cover, which is hardly much to go on at all in regards to working out velocities. There are also other candidates for first object in space, such as a V2 rocket in 1946, a Russian ICBM in 1957, and of course, Sputink, also in 1957. It seems that opinions on the issue, both lay and scientific, are split. Maybe one day future space explorers will find a glowing manhole cover orbiting some as yet undiscovered planet.

Why does swimming pool water turn blonde hair�green?
Swimming pools are the bane of blondes everywhere, but what's going on when blondes go green? The typical answer is that it's the chlorine causing the greenish tint, but this is actually wrong. In fact, the culprit is naturally occurring oxidized metals - in this case copper - that can be found in some water (and algaecides). Certain chemicals may be responsible for oxidizing the metals, but additives such as bleach and chlorine are not the cause of green hairitis. There are commercially available shampoos around that contain chelating agents, which consist of organic (usually) compounds that bind to and remove the metals in question.

Can humans naturally regenerate lost tissue?
Unfortunately, we're not as good at regeneration as some other species (such as salamanders), but we have top men working on this problem as we speak. Reports from research conducted in the 70s claim that children who had lost their fingertips could regenerate them within a month. Researchers add, however, that regeneration will only occur as long as the wound is not sealed with a flap of skin, which, of course, is the most obvious course of action to take. Ribs can also regenerate - so long as the periosteum membrane that surrounds it is left intact - but the standout organ in regard to regeneration has to be the liver. The liver can fully regenerate itself from as little as 25 percent of its original size.

What causes rigor�mortis?
Rigor mortis - the stiffening of joints that occurs after death - is the result of a chemical reaction going on inside the deceased's body. Actually, it's more accurate to say lack of a chemical reaction, because it's the absence of the energy molecule known as adenosine triphosphate (ATP) that allows rigor mortis to set in. In living muscle tissue calcium ions act like a zipper slider, where they help join two types of muscle fibers (actin and myosin), which is what we recognize as a muscle contraction. This process continues happily as long as the neurotransmitter acetylcholine and ATP are present, as ATP pumps calcium out of muscle fibers and releases the actin-myosin zipper. But shortly after death - anywhere from 10 minutes to a few hours - ATP supplies begin to dwindle, and muscles can no longer release; resulting in the state identified as rigor mortis.

What is the world's most venomous�insect?
It's not enough that this very common and very annoying insect can take over your home and family picnics, but it also takes out the most venomous title as well. We are of course talking about the ordinary, yet troublesome, ant - the Harvester ant, to be precise. Your reaction to the next bit of information may be swayed by whether you're a feline or insect lover. With just three stings a Harvester ant can, on a good day, kill a 1-pound kitten stone dead. Think about that while doling out the coleslaw at your next family barbecue.

Why do men still have nipples?
If evolution is such a rock-solid science, a fact that you can take to the bank, then why hasn't natural selection dumped male nipples in favor of, say, eyes at the back of our heads? The answer, apparently, comes down to a matter of human engineering in the womb, as embryos of both sexes appear to depend on a female "blueprint," complete with nipples. It's only later when the effects of genes, Y-chromosomes, and testosterone come into play that masculinization of the embryo occurs, but by then it's too late - the nipples have become a permanent fixture.

How do mood rings�work?
With the arrival of the mood ring in the 70s, reading the opposite sex became a breeze - or so they said. The claim is that the mood ring's "stone" would change color to reflect the emotional state of the wearer. But just how do they work, and does the mood ring live up to its promise of emotional transparency? The mechanism is not nearly as mysterious as mood ring merchants would have us believe. The bulbous center stone is a shell comprised of either glass or quartz, which conceals the all-important thermotropic liquid crystals. The crystals twist in response to varying environmental and bodily temperatures, and as they twist they change their molecular structure, which in turn alters the way that they absorb and reflect light - change color, in other words. Does the ring live up to its promise of displaying your inner emotions? Well, sucking on a thermometer may be more accurate.

Do chemical weapons have a�smell?
"I love the smell of napalm in the morning." Immortal words, but just what smell is being referred to here? While there are indeed some stinky chemical agents (chlorine gas, for one), the bulk of chemical agents used as weapons are usually colorless and don't have a smell at all. And the rest? Well, in fact, they have a rather pleasant odor, which is small comfort if you happen to be on the receiving end of one of these puppies. A World War One blister agent (so called because of the severe skin, eye and mucosal pain and irritation that they cause) called Lewisite had the strong smell of geraniums. The extremely deadly nerve agent Sarin has no smell at all, and nor do the crowd controlling agents known as Adamsite and CS gas (tear gas), which can cause vomiting, sneezing, and eye irritation.

Can hair turn gray�overnight?
Can people really sport a shock of white hair the day after they receive a fright or a spot of alarming news? It's not unheard of that hormone changes can change the color of your hair over the course of a few weeks or months, but a day? Hmm... As with skin, it's melanin that colors your hair, and therefore there are a few things that could turn your hair white. One of these is bleach, which isn't recommended if you want to keep your hair on. The other is exposure to ionizing radiation, which would ultimately leave you more worried about your immanent death rather than your newly acquired thatch of white hair. In any case, we're asking whether emotional distress can cause hair to turn white overnight. And while stress and hormones go hand-in-hand, it would take a few weeks or months before any effect on the melanin in your hair follicles would show.