Gravity Grind - A Day In The Life Of A Gravity Detective 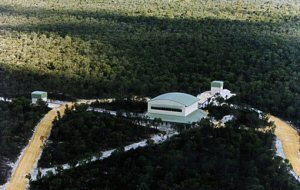 Located in a remote forest outside the world's most isolated city, the Australian International Gravitational Observatory (AIGO) is part of an international effort to detect Einstein's elusive gravity waves. This is Big Science. Nobel Prize winning stuff. And engineer Chunnong Zhao is happy to be in the thick of it. "It's a bit isolated out here," he said. "But it's not a problem." Dr. Chunnong knows that behind every Eureka! moment in science there's usually years of painstaking background work. And the promise of making one of the biggest discoveries in science is why you'll find him here every day, rebooting control systems, fine-tuning lasers and checking vacuum cavities.

The AIGO, an hour's drive from the city of Perth in Western Australia, works in conjunction with four other gravitational wave detectors located in Italy, Japan and the United States. The U.S. detector, LIGO (laser interferometer gravitational wave observatory), is run by the California Institute of Technology and Massachusetts Institute of Technology and consists of two sites in Louisiana and Washington. The US sites are about 3500km apart but effectively operate as a single detector. Scientists hope that this worldwide network of laser interferometers will catch the waves predicted to be produced by cataclysmic events, such as collapsing stars and colliding black holes.

Like a stone thrown into a pond, such violent events distort space and produce gravitational ripples, or vibrations, that, it is hoped, can be detected with extremely sensitive instruments on Earth. Success at detecting these ripples opens up some fascinating possibilities. It may allow us to do things like create a gravitational telescope and capture an image of a black hole, which by its very nature does not emit light.

There may be other applications as well, that we can't as yet imagine. Scientists took 100 years to explore and exploit the electromagnetic spectrum, not knowing beforehand how electromagnetic waves would change medicine, communications and astronomy. And nor can scientists today foresee the changes and new technologies that gravity waves might bring. At the very least, their discovery will allow scientists to shed light on the dark side of the Universe, from the birth and death of black holes to the Big Bang. Until now, our only source of information about the stars and galaxies has been via their electromagnetic radiation. 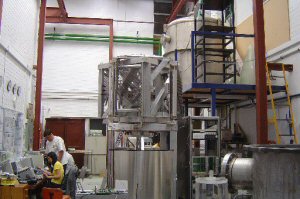 Dr. Chunnong's day begins with booting up the control systems that shine laser beams along the two 80 meter (100 yard) long vacuum cavities (pipes, to you and me) that join together at a right angle. This L-shaped rig will eventually grow to 4 kilometers (2.5 miles) in length as the site is expanded. The lasers have to be calibrated daily; a misalignment of less than the width of a hair could derail the entire system. Once calibrated, the researchers conduct a series of tests to measure the electronic noise and vibration levels inside the cavities.

The ends of each cavity arm house a set of delicately suspended sapphire mirrors that reflect the lasers back to the beam splitter that sent them down the cavities. Gravity waves passing through the planet should cause the mirrors to vibrate, interrupting the laser's journey along the cavity. Linked together, the four gravity wave telescopes will be able to determine where in space the signal came from, what speed it arrived at and, more importantly, what generated it.

"At the moment we are working on ways to reduce the heat of the lasers on the optical mirrors at the end of the cavities," said Dr. Chunnong. Cooling the cavities was one option, but Dr. Chunnong's group has instead turned to compensating for the heat build-up by inserting another mirror in the cavity to redirect the heat. "This represents the next generation of gravity wave detectors," he explained. "They need even higher capabilities, with the power inside the cavities expected to reach megawatt scale." 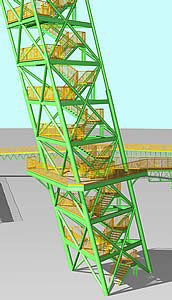 The AIGO facility also hosts the Gravity Discovery Centre, which attracts visitors curious to learn more about the laws of attraction. Construction is due to start next year on the center's own 40m high replica of the Leaning Tower of Pisa where visitors will be able to repeat Galileo's 16th century experiments.

Asked when he believed gravity waves would be discovered, Dr. Chunnong said: "...within the next 10 years. I think the Americans will pick them up first with the detectors they already have running. But it is an international project. We will play a big role."

Dr. Chunnong was confident that successful detection would change the way scientists viewed the Universe. "We really don't know how useful they will be because we haven't found them yet," he said. "But I believe we will able to observe the Universe, not by what we see, but by what we hear."