Eye Of The Beholder Redux

Staring solemnly at an artwork, mulling over stylistic, historical and cultural influences, how much thought do we give to the biological factors influencing the artist's unique aesthetic? Stanford University ophthalmologist Michael Marmor has been pondering that question and exploring how Claude Monet and Edgar Degas - artists who suffered from cataracts and retinal eye disease - actually saw their world, and how their works were influenced by their afflictions. Marmor's insights not only raise some poignant questions about the nature of art appreciation, but also highlight how both science and art have the capacity to expose the natural world beyond everyday perception.

Using off-the-shelf software, Marmor - who has written two books on the subject of artists and eye disease - recently revealed how Degas and Monet would most likely have seen their subjects as they worked. Degas suffered with retinal eye disease for 50 years, leaving him with eyesight somewhere between 20/200 and 20/400, and Marmor's simulations of Degas' works are so blurry that his characteristic brush strokes are barely visible.

Likewise, Monet's works, most notable for their lively, vibrant colors, showed the muted, dark tones characteristic of someone suffering, as he did, from cataracts. "Monet must have struggled mightily as he looked out into the murky yellow-brown garden and tried to decide what subtle impression to create on canvas," says Marmor. "Slowly progressive age-related cataracts manifest as yellowing and darkening of the lens. This has a major effect on color perception as well as visual acuity."

But does it really matter that these two great artists suffered from eye disease? According to Marmor, the question it raises is whether or not Monet and Degas meant the works to look as they did, or whether they are solely a product of their eye condition. "These simulations may lead one to question whether the artists intended these late works to look exactly as they do," says Marmor. "The fact is that these artists weren't painting in this manner totally for artistic reasons." Art critics trying to glean the reasons behind Monet's aesthetic shift as he entered his late period may need to consider that it most likely had nothing to do with artistic intent at all. So, should we now view and reappraise the pair's work in the way that the artists saw them - the way that they intended them to look?

Philosophical speculation aside, what is so interesting about Marmor's study is how these artists managed to overcome their disability - providing people suffering from similar afflictions with hope - and how vision and the brain work in unison to produce our perception of the natural world. In his series on science and art published in Nature, art historian Martin Kemp discusses what he calls "structural institutions," where he refers to the visual capacity of both artist and scientist to critically perceive and model nature. Kemp notes that through their work, artists; "contributed not only in the obvious areas of illustration but also in the more searching evocation of the causes of natural effects." Kemp implies that artists, like scientists, are doing their bit to decipher and unlock the mysteries of human perception.

Scientific analysis of artistic perceptions can uncover some spooky correlations. After analyzing the works of Van Gogh late last year, a team of physicists from the National Autonomous University of Mexico reported in Current Science that the great master's manic brush strokes: "had an uncanny talent for depicting the phenomenon of turbulence," and that "the brushstrokes in the paintings swirl and eddy like the currents in a stream... [where] changes in luminosity from point to point were identical to the variations in speed of different points in a turbulent liquid." Adding even more mystery to the whole affair was team leader José Luis Arag�n's observation that Van Gogh's profound insights into turbulence can only be found in paintings he created during periods of mental instability. The periods that Van Gogh once described as "the storm within," says Arag�n.

Like Marmor, other researchers are examining the link between artistry and human perception. One example of this includes research into how optical illusions deliberately utilized by artists trick our minds into seeing representations of reality on many levels of perception. These illusions may range from something as seemingly mundane as rendering a two-dimensional image to look three dimensional, to still images that appear to move before our very eyes. It has long been thought that these illusions are the result of inherent faults in visual processing networks. But more recent findings suggest that this is not the case at all, and that these visual tricks actually help us function in our surrounding environment. 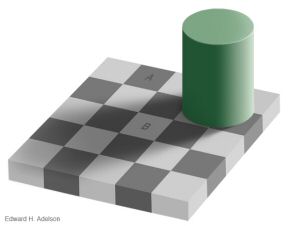 Using the well-known checkerboard illusion, Alejandro Maiche, from the Universitat Aut�noma de Barcelona, explains that the way our visual system perceives the board's colors has less to do with the objects that our eyes see, and more to do with how we interpret them. "You will probably have no difficulties in stating that square A is much darker than the center square, labeled B," says Maiche, "However, if we measure the luminance using a photometer, we find that the two squares have exactly the same luminance."

"The visual system is not a good measure of 'physical data', but this is not its purpose. Its main role is to decipher the information in the image and thus perceive the nature of the objects seen," explains Maiche. "From this perspective, perception must be understood as a procedure for processing the information in the surrounding environment rather than a reflex of basic physics. Perception, therefore, involves a series of operations to transform, analyze, synthesize and activate knowledge."

It's the manipulation of three-dimensional space through color and tone that has led commentators such as Nature's Margaret Livingstone to consider artists to be in a similar vein as neurobiologists. "Visual artists are, in a sense, neurobiologists of vision, studying the potential and capacity of the visual brain with techniques that are unique to them," says Livingstone.

This became especially evident to Professor Carlos Hugo Espinel, after making a mathematical analysis of Jan Vermeer's painting "Woman Holding A Balance." Writing in The Lancet, Espinel details the techniques used by Vermeer to get the visual system to "believe" in the woman's presence within her surroundings. "Her body is proportional to, and her size consistent with, the objects," says Espinel. "Shading rounds her features, gives her garments depth. Daubs of paint render the jacket fur rough; wet on wet brush strokes render her skin smooth." Like Maiche, Espinel too found that the context of tonal differences - rather than color perception - is how the visual system perceives such scenes. "This integration of art and neuroscience presents a new way of seeing Woman Holding a Balance," says Espinel. "It applies knowledge of how the brain 'sees' to explain visual effects. It suggests that an illusion succeeds when it satisfies brain requirements for the perception of reality."

In this sense, argues Maiche, it is unfair to say that such illusions "deceive" the system. "In general, optical illusions do not deceive us in our everyday interaction with our surroundings but rather they give us more appropriate knowledge to direct our behavior. In short, it seems that it is to our advantage, and even necessary, that we 'suffer' some of these optical illusions."

It is also fortunate that when we gaze upon some of these illusions that they may also elicit feelings of awe, inspiration, and reflection. That the same can still be said of both Degas and Monet's work despite their eye afflictions is intriguing, and raises many questions about how and why we appreciate abstracted realities. Perhaps it is for the same reasons that we take some comfort in the abstractions of science.

Related:
Artists Often Bonkers
Retina Adapts By Suppressing The Commonplace
The Eyes Don't Have It
Read more from Stanford about the changes in Degas' and Monet's painting styles over time and see simulations of how their eye diseases may have affected what they saw.