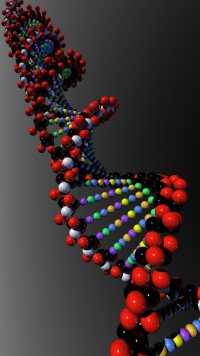 The startling discovery that all forms of life on Earth use the very same mechanism to initiate a cell's division into twin daughter cells has caused somewhat of a commotion among biologists. It may not sound like much to the layman, but the discovery casts doubt on a number of long-standing and cherished biological models. But rather than it being a crisis in biology, it simply shows how science - in an era that some have dubbed the dawn of a "scientific dark age" - remains as vital and dynamic as ever.

When Richard Dawkins' The Ancestor's Tale was published, there was, and still is, much uncertainty about where on the evolutionary tree the large, complex cells known as eukaryotes resided. Eukaryote cells have walled nuclei with mitochondria, and make up the bodies of all animals and plants on Earth. Dawkins presents the development of eukaryotes as "one of the most momentous events in the history of life," and believes the biggest uncertainty about them is trying to work out where they fit in regard to the evolutionary tree of life. But while Dawkins explains that eukaryotes comprise all life on Earth, this is to the exclusion of "the true bacteria and the archaea," which both fall under the category of prokaryotes. Prokaryote DNA replication has always been considered quite different, because unlike the eukaryotes, whose DNA is contained within a membrane-bound nucleus, prokaryote DNA is not contained within a defined nucleus. The prokaryotes and eukaryotes are said to have split and developed into different domains of life millions of years ago.

But such is the uncertainty of pioneering science that this fundamental tenet of biology looks to be false. The recent discovery about eukaryotes and prokaryotes is that they all share in common what seems to be a fundamental mechanism. Furthermore, researchers say that this mechanism common to prokaryotes (bacteria and archaea) and eukaryotes predates their split millions of years ago. If this is true, just what are differences that separate these 3 domains of life that we once considered so different? Can the differences be considered fundamental to each, or, in light of this recent discovery, are the differences merely superficial?

Researchers working at the United States Department of Energy's Lawrence Berkeley National Laboratory and the University of California at Berkeley have demonstrated that the core mechanisms for initiating DNA replication are identical for all three domains of life - Archaea, Bacteria and Eukarya. The results imply that the DNA switching mechanism works so well that evolution preserved its use over billions of years, and in all forms of life. The research involved two studies that identified a helical substructure within a super-family of proteins called AAA+, which turns out to be the molecular "initiator" of DNA replication in both the bacteria Escherichia coli (E. coli) and in a eukaryote, represented by Drosophila melanogaster (the fruit fly). "Our two papers fuse together a number of biophysical research techniques to take our understanding of the mechanics of DNA opening and replisome construction to a new level," said biochemist Michael Botchan, a collaborator on the Drosophila study.

As Botchan implies, what scientists know about cell DNA replication is not as straightforward as some may assume, and is in fact a highly contentious area of science. "The ability of a cell to replicate its DNA in a timely and faithful manner is fundamental for survival, but, despite decades of study, the structural and molecular basis for initiating DNA replication, and the degree to which these mechanisms have been conserved by evolution have been ill defined and hotly debated," said biophysicist Eva Nogales, a collaborator on the Drosophila study. But taking earlier research that identified AAA+ as a fundamental component of DNA replication into consideration, the researchers managed to show that the process of replication is an ancient event that evolved before the prokaryotes and eukaryotes split into separate branches of life.

The finding falls neatly into place for James Berger, structural biologist, who participated in both of the studies. "Our findings of evolutionary kinship between the DNA initiators in all three domains make sense because, to paraphrase Francois Jacob [a French biologist], the one thing a cell wants to do is to become two cells. A cell can't do this if it doesn't replicate its DNA in the right place, at the right time, and in the right manner, while simultaneously avoiding over-replication." The two teams did not begin their research in unison, and it was only later, after a comparison of notes, that they decided to pool their findings, which Berger described as "a convenient congruence of timely results."

"We had solved our initiator structures in the E.coli study just as results were being generated from the Botchan and Nogales groups on the Drosophila study. Once we compared notes, we immediately pooled forces. When we subsequently were able to dock our bacterial model into a region of their eukaryotic structure, it solidified the evolutionary and functional similarities between the two mechanisms," said Berger. The discovery was in part made possible thanks to the remarkable technology used to gaze upon molecular frontiers previously inaccessible. Berger's E.coli study, for example, used the superior quality x-rays of Beamline 8.3.1 housed at Berkeley Lab's Advanced Light Source synchronization.

Using the data collected from Berkeley's protein crystallography facility, Berger's team constructed a high-resolution model of the protein known as DnaA. DnaA has proven to be yet another headache for researchers over the years, because while they know that it controls the process of initiating DNA replication in bacteria, they suspect that it is also responsible for a host of other functions. But Berger's team found that the ring-shaped AAA+ proteins formed a right-handed spiral superstructure when DnaA binds with adenosine triphosphate (ATP).

This came as a surprise to the researchers, as it is known that ring assemblies in other functional AAA+ complexes are closed. "It is likely that the AAA+ rings of the replication initiators are open to allow other proteins to dock onto the initiator complex," said Berger. Examining the structure of the AAA+ superhelix also showed that it will wrap coils of the DNA double-helix around its exterior, which results in the well-known "spiral staircase" of the DNA deforming in preparation for separation and the unwinding of its 2 gene-carrying strands. "These other proteins can help add layers of complexity, such as assisting with helicase loading or inactivating the initiator after replication has begun. The open rings also probably allow DNA to interact with the interior of the initiator assembly," Berger explained.

The significance of this finding is immense as studies conducted over the past decade have demonstrated that all of the various events initiating DNA replication in a eukaryote are guided by a single complex of proteins called the origin recognition complex (ORC). But prior to the availability of high-resolution equipment, models of the ORC proteins did not truly represent the structure of the initiator. As a result, the known differences between the eukaryotes and prokaryotes - contained versus uncontained DNA, respectively - were enough to convince scientists that eukaryote and prokaryotes could not possibly share the same mechanisms for DNA replication. But what the latest images showed for the first time was when ORC binds to ATP it forms a AAA+ helical structure similar to that of the DnaA superhelix found by Berger and his team in their E.coli study. "This work provides the first view of the mechanical transitions in ORC driven by ATP in a higher organism," said Eva Nogales, adding that: "The structural similarity to the DnaA initiator found in the E.coli study suggests that there are likely to be strong mechanistic commonalities in the ways that initiators engage and remodel replication origins, as well as in how they facilitate replisome assembly."

When DnaA protein binds with ATP, the ring-shaped AAA+ proteins
assemble into a right-handed helix.

The concept that all three domains of life share the same DNA replication initiator is big news, and will mean that biologists may have to tweak or change entirely many of the models representing eukaryotes, and DNA replication generally. "This not only has important implications for the respective functions of these different mechanisms, it also calls into question some cherished models in the field," said Berger. Nogales added that: "The specialization of DNA replication initiators took place a long time ago, separating them from other members of the AAA+ super-family of proteins while maintaining an identity among themselves that reflects the importance of the replication process. Through the millions of years, evolution has added bells and whistles around this highly conserved central engine."

Yes, science is alive and still kicking, and while this new discovery will probably lead to a re-appraisal of biological models, what is sure to result is an improved biological model that will fill what Intelligent Design, creationist and anti-science advocates like to call a "gap." As Dawkins says: "Where science scores over alternative world views is that we know our uncertainty, we can often measure its magnitude, and work optimistically to reduce it."