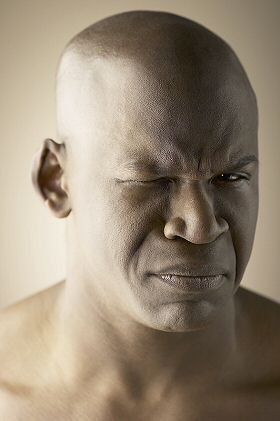 Experiencing a stomach-turning scene seems to automatically elicit feelings of disgust, leading scientists to suspect that disgust has an evolutionary function. Indeed, it may have once been central in preventing food poisoning or bad breeding, but expert opinion ranges widely in regard to how useful disgust is in today's society, with the naysayers claiming that disgust is just an irrational evolutionary throwback. Others claim that disgust, like any human emotion, is essential to our humanity, and to ignore or somehow remove it from the equation is just... well, downright inhuman. It's a confusing issue, but fortunately disgust has caught the interest of a number of researchers, and their views and findings on this emotional dinosaur are intriguing.

Much of the recent research conducted on disgust is based on The Disgust Scale, which is a self-report personality scale developed in 1994 by Jonathan Haidt, Clark McCauley, and Paul Rozin. The scale's original 32 disgusting questions has since been revised, and now includes statements that subjects must rank on a scale of disgustingness ranging from 0 to 4, such as; "I might be willing to try eating monkey meat, under some circumstances"; "Even if I was hungry, I would not drink a bowl of my favorite soup if it had been stirred by a used but thoroughly washed flyswatter"; "You see a man with his intestines exposed after an accident"; and "You are walking barefoot on concrete, and you step on an earthworm."

The first question researchers investigating disgust usually attempt to answer is why disgust is an innate human characteristic in the first place. According to Haidt and his colleagues, some of the answers to this question are obvious, but others not so. "It makes sense that we are disgusted by things that can contaminate our food," they say, "but why does this food-related emotion extend itself so deeply into our social world, so that people feel disgusted by certain ethnic groups (or conversely, by racism), by homosexuality (or by homophobia), and by a variety of social and moral violations that don't involve anything physically contaminating?"

These are the sorts of questions that Dan Fessler, associate professor of anthropology and director of UCLA's Center for Behavior, Evolution, and Culture, set out to answer using The Disgust Scale. He wanted to show how we use disgust in various day-to-day situations, and to identify instances where the emotion appears inappropriate or irrational. Like Haidt and his colleagues, Fessler believes that there is a strong survival factor associated with disgust. "The reason we experience disgust today is that the response protected our ancestors," says Fessler. "The emotion allowed our ancestors to survive long enough to produce offspring, who in turn passed the same sensitivities on to us." This certainly helps explain why we're disgusted when we see (or even hear) someone blow their nose or cough, or catch a whiff of feces, as avoiding such things may prevent us being contaminated with pathogens.

But the wheels of evolution turn slowly, and yesterday's primitive solution to the procreate-or-perish problem may have undesirable effects in a later age. "We often respond to today's world with yesterday's adaptations," says Fessler. "That's why, for instance, we're more afraid of snakes than cars, even though we're much more likely to die today as a result of an encounter with a car than a reptile." Furthermore, Fessler reasoned that things we found disgusting were limited to external appendages, rather than internal organs where we have no jurisdiction. "Our ancestors would not have enjoyed the same advantage from disgust reactions with regard to protecting internal organs. So they benefited from focusing disgust reactions on the parts of the body that are on the outside and interface with the world around us," says Fessler. "The disgust we feel when we consider individual body parts reflects an adaptive goal of avoiding the transfer of pathogens." Fessler's reasoning was later validated after subjects revealed that the idea of a hip, kidney or artery transplant was considerably less disgusting than having their tongue, genitalia or anus transplanted.

From this basic concept of disgust, Fessler was able to successfully and logically apply his theory to understand how disgust operates in pregnant women during their first and second trimester. In the first trimester, hormones are released and the woman's immune system is lowered to allow for the development of the fetus, a "foreign" invader. To counteract the lowered immune system, says Fessler, pregnant women develop a heightened sense of disgust, and subsequently become pickier about what they eat. "Natural selection may have helped compensate for the greater susceptibility to disease during this risky point in pregnancy by increasing the urge to be picky about food, however much additional foraging that required," says Fessler. But he found that there was yet another effect that came with elevated levels of the yuck response in pregnant women: xenophobia.

In a further test, he asked the pregnant women to read two essays, one written by a foreigner criticizing American ideals, and another by a patriotic US citizen. The test showed that women in their first trimester were less likely to want to meet the foreigner. "Since the need for assistance from any other human being increases with pregnancy, the response doesn't make sense unless you consider outsiders as carriers of disease and infection," says Fessler. "We suspect that, around the world, cultures have discovered that an easy way to elicit prejudice toward outsiders is to associate them with illness. Because emotional reactions that protect against disease are elevated during the first trimester, xenophobia comes along for the ride and is similarly increased early in pregnancy." Further tests conducted by Fessler also revealed that during ovulation, women had elevated levels of disgust toward the idea of incest, older partners and any other individuals that might compromise conception or jeopardize a pregnancy.

Interestingly, outside of pregnancy, disgust-based prejudice appears to be largely a product of our own making. When we try on clothing in a department store, it's no secret that it's likely someone has done the same thing before us. But research from the University of Alberta shows that when test subjects have watched or been told about someone wearing an item of clothing before them, they are much less inclined to try on the item. "I think this research shows that shoppers display irrational behaviors," says University of Alberta's Professor Jennifer Argo. "We come into contact with objects that other people have touched all the time, but I guess we never outgrow the simple notion of cooties, especially when we are reminded of them."

Less trivially, disgust is sometimes aligned with what might be believed to be an innate moral code. In this respect, legal and social taboos - from homosexuality and necrophilia, to human cloning - are enforced as a result of society's varying degrees of disgust toward them. Like Haidt, American philosopher Martha Nussbaum, in her book entitled Hiding From Humanity: Disgust, Shame, And The Law, is fascinated as to why such an archaic emotion like disgust holds such sway over us.

Intolerance and prejudice derived from disgust can be used as both an offensive and defensive tool, according to Nussbaum, who cites an eyebrow-raising, though not isolated, case that appeared before a US court some time ago. The case involved a man who shot and killed one woman and injured another after he saw them making love in the woods. When his case came to trial his defense was that he found the lesbian act disgusting, and drove him to murder. Nussbaum says that many laws are based on disgust, and it is common for judges to link obscenity laws directly to levels of disgust felt by the "community at large". Nussbaum adds that while the offender using disgust as his defense for shooting two women did not succeed, and was convicted of first-degree murder, "other offenders have succeeded in winning mitigation with a similar defense."

Nussbaum suggests that disgust, unlike other emotions that play a role in the law, should be treated with some skepticism. "That skepticism should grow greatly as we see how disgust has been used throughout history to exclude and marginalize groups or people who come to embody the dominant group's fear and loathing of its own animality and mortality," she says.

From pregnancy and shopping, to racism and the making of societal law, disgust seems to play a central role. Instinctively, it seems obvious that we should be equipped with a defense mechanism against dangerous objects and people, but with a little rational thought the issue of disgust becomes decidedly murky.