How Do We Cure An Industrial Hangover? 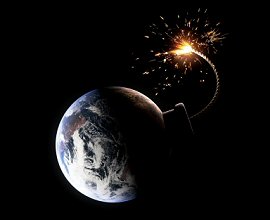 As we proceed turkey and pudding-stuffed into yet another year, and we've finally nursed our sore heads back to health, there's another consumption-based ailment to consider: our industrial hangover. How many of us have finally accepted the idea that humans are adversely affecting the Earth's climate? And just as importantly, how many people will make good on their resolution to do their part in reducing greenhouse gas emissions? According to a wealth of scientific data, the consequences of not doing so are, to say the least, dire - it's one New Year's resolution that we don't want to renege on.

Some scientists have been harping on for years about our entry into what they call the "Anthropocene," which started, arguably, in the 18th century, when humans began to have a major impact on the Earth's climate and ecosystems. According to the advocates of the Anthropocene theory, we are currently in what is called The Great Acceleration (or stage-2), where human enterprise in industry has exploded to Earth shattering levels.

Hopefully we are getting a lot smarter, and stage-2 of the Anthropocene will move into stage-3, where a reaction to the shocking realities of stage-2 will ensue - as a result of self-aware engendering aspects of free and open markets and the Internet. How societies will react to these stark realities during stage 3 has been a topic of heated debate, and is the topic of a paper published in the latest edition of the journal Ambion.

While their ideas may be plagued by controversy, the authors of the Ambion article, entitled "The Anthropocene: Are Humans Now Overwhelming the Great Forces of Nature?" are well-respected within their chosen fields. Will Steffen is the Director of the Fenner School of Environment and Society at the Australian National University, Canberra, whose research interests include many aspects of Earth System science. John R. McNeill is the Professor of History and University Professor at Georgetown University, whose research encompasses environmental history of the Mediterranean world, the tropical Atlantic world, and Pacific islands. Paul J. Crutzen, the man responsible for coining the term "Anthropocene" in 2000, is a former Director of the Atmospheric Chemistry Division of the Max Planck Institute for Chemistry in Mainz, Germany. He is currently a part-time Professor at the Scripps Institute of Oceanography, and his research has been predominantly concerned with the role of chemistry in climate and biogeochemistry.

These three authors address three broad philosophical approaches to the collapse of Earth systems during stage-3 of the Anthropocene: the business-as-usual approach, mitigation, and geo-engineering. The authors say that confronting the frightening realities that have come as a result of years of human enterprise, and then seriously assessing our options are major priorities.

According to the authors, in the last 50-years - the period dubbed "The Great Acceleration" - the world's population doubled to over 6-billion by last century's end, petrol consumption has grown by a factor of 3.5 since 1960, and the number of cars has increased from 40-million to nearly 700-million in 1996. Added to this is the observation that populations living in urban areas have increased from 30 percent in 1950 to 50 percent in 2000... and growing.

As a result of this incredible industrial expansion and enterprise, and with little to no regard for Earth Systems during this time, say the authors, "Nearly three-quarters of the anthropogenically driven rise in CO2 concentration has occurred since 1950 (from about 310 to 380 ppm), and about half of the total rise (48 ppm) has occurred in just the last 30 years." 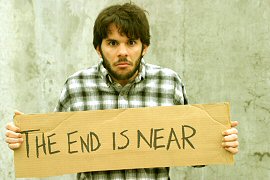 The first of the three broad approaches that Steffen, McNeill, and Crutzen consider is the business-as-usual model, which relies on a few assumptions that may end up getting us all into a lot more strife than if we took a more proactive approach. The business-as usual-model is the one that we'd obviously all prefer, because we can all go around pretending that nothing's wrong. And given the conveniences and luxuries that fossil fuels have provided us for so long, is it really so surprising that we're reluctant to let go of them? Come a stinking hot day, and despite warnings of power cuts from energy providers, we're still cranking up our air-conditioners to maximum. The business-as-usual model, preferred by most governments and private industry, seems to tap into this reluctance, and our seeming inability to make the connection between light switches and car keys with the future of the planet's ecosystems.

But added to this is a more pragmatic argument (excuse?) doing the rounds - that changing our ways too quickly from our beloved fossil fuels to alternative fuel sources will lead to the collapse of fossil fuel producing economies worldwide. Furthermore, argue the naysayers, the current market system can more than handle such a transition; as long as it is done steadily and methodically. They also argue that money spent on pro-active climate change strategies is diverting money away from more important human needs. Though what human needs are more important than stopping the Earth's climate from imploding is anyone's guess - and who is saying that it needs to be an all or nothing enterprise anyway?

The problem with the business-as-usual model is quite simple: there's no guarantee that nature will be patient enough for the wheels of government and private enterprise to turn. And if we get it wrong we would have committed ourselves to anything between 10 to 100 years of further adverse environmental change, according to the authors of the Ambion article. The question is, what reason is there to put the Earth's environmental future into the hands of economists? Will ecologists be balancing next year's national budget?

Mitigation, the second approach, is more proactive. The path of mitigation means that we not only acknowledge the very real threat of anthropogenic climate change, but we seek out ways to modify our behavior in an effort to reduce or reverse the adverse effects of climate change. "The ultimate goal is to reduce the human modification of the global environment to avoid dangerous or difficult-to-control levels and rates of change, and ultimately to allow the Earth System to function in a pre-Anthropocene way," write Steffen, McNeill, and Crutzen.

New technologies will likely play a pivotal role during and after this huge transition, but perhaps the biggest challenge by far will be a general change in our attitudes toward sustainability. This will likely be a big hurdle, as both domestic and global market infrastructure are currently geared toward wholesale land clearing, mining, industry, and manufacturing, which is in turn driven by the public's desire to consume the goods and services that these enterprises produce. It's like the snake eating its tail, where does the buck stop? Admittedly, this approach may also take more time than we have. But unlike the business-as-usual model, we will have something to show for our efforts in the end - something that may solve our Earth System woes.

The third option on the table is known as geo-engineering, and is probably just as volatile a topic, perhaps even more so, as the business-as-usual model. Geo-engineering is the idea that we can purposefully tweak the Earth's global-scale processes and counteract human-driven change, say the authors. It's obviously not an option to be taken lightly, as a mistake here or there on a global scale could further accelerate our problems rather than reverse them. As a result, say the authors, going down the geo-engineering path raises "serious ethical questions." So why on Earth would geo-engineering even be considered an option?

It's already a recognized fact that some mitigating initiatives in crucial areas of a global cleanup would fall flat; not through lack of willingness, but because of the complex nature of Earth Systems, and the severity of some of the damage already done them. In their paper, the authors' use the example of aerosol particles - such as smoke, sulfate, dust, etc. - emitted into the atmosphere by our own hand, which leads to a net cooling effect as a result of these particles interacting with clouds. In effect, these aerosol particles counteract the greenhouse effect; masking much of the warming we should be exposed to by now. So in fact cleaning up these aerosols would have the adverse effect of increasing greenhouse warming.

Sweeping CO2 under the carpet is another option under the table. "One engineering approach to reducing the amount of CO2 in the atmosphere is its sequestration in underground reservoirs," write Steffen, McNeill, and Crutzen. "This 'geosequestration' would not only alleviate the pressures on climate, but would also lessen the expected acidification of the ocean surface waters, which leads to dissolution of calcareous marine organisms."

Geosequestration certainly sounds promising, but what about the dammed if you do, damned if you don't scenario in regard to the aerosol problem mentioned above. "In this situation some argue for geo-engineering solutions, a highly controversial topic," write the authors.

"The idea is to artificially enhance the Earth's albedo by releasing sunlight-reflective material, such as sulfate particles, in the stratosphere, where they remain for 1-2 years before settling in the troposphere. The sulfate particles would be produced by the oxidation of SO2, just as happens during volcanic eruptions... The sulfur injections would have to occur for as long as CO2 levels remain high." The authors add that the input of sulfur could be tweaked to counteract the possibility of CO2 levels doubling, with an input of sulfur equaling just over 10 to 20 percent of what the Philippine's volcano Mt Pinatubo produced in 1991.

The authors predict even grander geo-engineering schemes in the future, such as preventing the onset of the next ice-age, or preventing asteroids and comets from hitting the Earth. But geo-engineering will likely always be controversial because the scales of effect are so enormous. "Just the suggestion of geo-engineering options can raise serious ethical questions and intense debate," say Steffen, McNeill, and Crutzen. "A critical issue is the possibility for unintended and unanticipated side effects that could have severe consequences."

The only way that widespread debate can begin regarding these three options - or a mixed bag of specific initiatives drawn from these three - is to accept that the party's over, and realize that we now we have one hell of an industrial hangover to nurse. It's time to herald in stage-3 of the Anthropocene!