Take Me To Your Lame Duck President 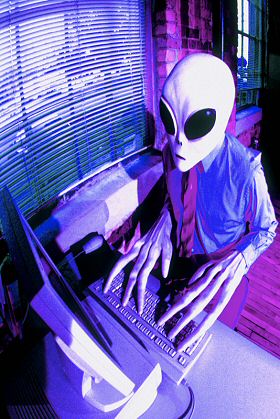 Along with the recent discovery of the Earth-like planet orbiting Gliese 581, comes renewed speculation about the possibility of making contact with an extraterrestrial intelligence (ETI). Somewhat tellingly, immediately after the Gliese 581 discovery, puny Earthling bookmakers lowered the odds of us stumbling upon aliens from 1,000/1 to 100/1.

Assuming we do find some kind of alien intelligence, knowing how to handle an alien meet-and-greet is obviously going to be critical toward fostering good relations. Will a meeting of worlds bring us undreamt of prosperity, or will it represent yet another catastrophe in the chronicles of human existence? And as such, do we greet them with open arms, or with guns-a-blazing? With so many tough questions to consider, it's fortunate that there are folks who have diligently been working on a first contact protocol for quite a while now.

So, apart from presenting our orifices for probing, just how does one go about meeting and greeting an ETI? Well, your best bet is probably to look up Michael A. G. Michaud, who has devoted many years to the subject of potential alien-human get-togethers. "What happens when different ethospheres touch?" wrote Michaud way back in 1979. "That moment may be the most important turning point in the history of intelligence."

As a past Director of the U.S. State Department's Office of Advanced Technology, and former Chairperson of the International Academy of Astronautics Subcommittee on Issues of Policy Concerning Communication with ETI, Michaud is a leading figure in preparations for any future contact with an ETI. Both during and since leaving these senior positions, Michaud has devoted much of his time making his views on ETI known to the public. Michaud's best known and most popular work, in addition to numerous other ETI-diplomacy related articles, is his recent Contact with Alien Civilizations: Our Hopes And Fears About Encountering Extraterrestrials. After a peruse of such publications, you cannot help but get the feeling that Michaud is priming us for our inevitable rendezvous with ETI in an effort to keep the xenophobic blunders to a bare minimum. After all, it's not like we humans have a great track record of cultural tolerance within our own race.

Wary of falling into the trap of anthropocentrism - and the erroneous assumptions that such thinking can produce - Michaud's arguments are measured and to the point. "The bottom line is that we do not know how an ETI might react to contact with us," says Michaud; "nor do we know what its capabilities might be." To hammer home this note of caution, Michaud cites renowned UCLA physiologist and environmental historian Jared Diamond, regarding our own "enthusiastic" attempts at contacting an ETI. Diamond considers what might happen if our "naïve" and potentially "dangerous" astronomers finally do make contact and some form of ETI subsequently drops in for a visit. What if they turn out to be less than friendly, asks Diamond, what if they turn out to be more like us than we would like? "The extraterrestrials might behave the way we intelligent beings have behaved whenever we have discovered other previously unknown intelligent beings on earth, like unfamiliar humans or chimpanzees and gorillas," Diamond wrote in the New York Times. "Just as we did to those beings, the extraterrestrials might proceed to kill, infect, dissect, conquer, displace or enslave us, stuff us as specimens for their museums or pickle our skulls and use us for medical research."

But while such talk may give the top brass in Washington a severe case of itchy trigger-finger, Michaud is equally fascinated by the other possibilities that a potential meeting with our intergalactic neighbors may bring - but perhaps not in the way that you'd expect. Michaud argues that if we assume that an ET civilization exists relatively close to our own, then it is our collective responsibility to pool Earth's resources and maximize our intelligence and technological capabilities. Basically, keeping up with the Jones's as best we can, in an effort to command some galactic respect, and just in case the neighbors turn out to be a little hostile. This is a beneficial approach even if we never come into contact with ETI, argues Michaud, as it encourages international cooperation. "Anticipating contact could motivate us to work to reduce the disparity between ourselves and a more advanced technology," says Michaud. "The greater our natural and technological resources, the more capable our future civilization will be and the more seriously it will be taken by others. Making such advances would enable our own future even in the absence of contact."

But Michaud also stresses the importance of reconnaissance, and setting up and maintaining lines of communication in the event that we do make contact. From this position flow many pertinent and vexing questions, such as who should speak on behalf of the Earth, and what this person or organization should say. Would we really want someone like George (Dubya) Bush speaking on behalf of humanity? Michaud suggests that a whole new bureaucracy devoted solely to human-ETI communications may need to be set up (I hope the aliens like filling out forms!).

Other important issues include the time disparity in communication between worlds. "If the ETI we detect is hundreds, or thousands, of light years away we will face long delays between an outgoing message and a reply," says Michaud. "In the interim, human cultures and politics could change in ways that affect the dialogue or even bring its continuation into question." Unless we sort out something like instantaneous quantum communication before then, communication may be a very slow and disjointed process indeed.

Michaud strongly advocates the need to get behind detection initiatives such as SETI, and the enhancement of spacecraft capable of finding ETI. So far, suggestions for such initiatives have enjoyed broad support. In March of this year, Dr. Jill Tarter, Director for the Center for SETI Research, said that; "we should expect many surprises in regard to ETI in the future."

NASA, too, is broadening its horizons in regard to what life is like beyond our Earth-centric perspective, stating that non-green plant life may exist on other planets. "Future space telescopes will study extrasolar planets, to see if they are habitable, and could have alien plants," say researchers at NASA's Astrobiology Institute. If so, then perhaps we could send specially designed spacecraft to make random patterns in alien crops, just to mess with their heads.

Michaud thinks colonization is a good strategy, saying that we shouldn't be sitting around waiting for an alien visitation; rather, we should be out trying to settle the universe ourselves. Why? Well, if it turns out that we are alone in the universe, then we owe it to ourselves to spread the seed of human intelligence throughout the universe (hmm?). In this respect, Michaud cites sci-fi author Brian Aldiss, who once said; "Humankind might consider it not impossible that we should go into the galaxy with the intention of becoming its consciousness."

But assuming that ETI does exist, Michaud, like Jared Diamond, warns that governments have a grave responsibility about what, if any, information they transmit into space. "By broadcasting our presence and searching for others we are inviting a discontinuity in human history," cautions Michaud.

Related articles:
An Exoplanet With Liquid Water?
Low Budget Exoplanet Imaging System Takes Shape
Planet Earth: Love It And Leave It
Pulsars: What Are We Missing?
We Come In Peace - NOT!
It's Life Jim, But How Do We Know It?
Earth-Like Planets Galore?