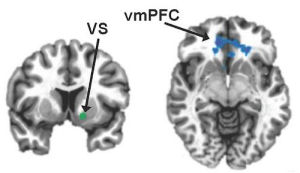 Around one third of people with depression have high levels of inflammation markers in their blood. Now, new research appearing in in Molecular Psychiatry shows that persistent inflammation affects the brain in ways that are connected with stubborn symptoms of depression, such as anhedonia (the inability to experience pleasure). The findings bolster the case that the high-inflammation form of depression is distinct, and are guiding researchers' plans to test treatments tailored for it.

Anhedonia is a core symptom of depression that is particularly difficult to treat, explained the study's lead author Jennifer Felger, from Emory University. "Some patients taking antidepressants continue to suffer from anhedonia," Felger says. "Our data suggest that by blocking inflammation or its effects on the brain, we may be able to reverse anhedonia and help depressed individuals who fail to respond to antidepressants."

In a study of 48 patients with depression, high levels of the inflammatory marker CRP (C-reactive protein) were linked with a "failure to communicate", seen through brain imaging, between regions of the brain important for motivation and reward (pictured above).

Neuroscientists can infer that two regions of the brain talk to each other by watching whether they light up in magnetic resonance imaging at the same times or in the same patterns, even when someone is not doing anything in particular. They describe this as "functional connectivity."

"We were interested in these regions of the brain because of their known importance for response to reward," she says. "In addition, we had seen reduced activation of these areas in people receiving immuno-stimulatory treatments for hepatitis C virus or cancer, which suggested that they may be sensitive to inflammation."

High CRP levels were also correlated with patients' reports of anhedonia: an inability to derive enjoyment from everyday activities, such as food or time with family and friends. Low connectivity between another region of the striatum and the ventromedial prefrontal cortex was linked to a different symptom: slow motor function, as measured by finger tapping speed.

As a next step, Felger is planning to test whether L-DOPA, a medicine that targets the brain chemical dopamine, can increase connectivity in reward-related brain regions in patients with high-inflammation depression. Felger's previous research in non-human primates suggests that inflammation leads to reduced dopamine release. L-DOPA is a precursor for dopamine and often given to people with Parkinson's disease.