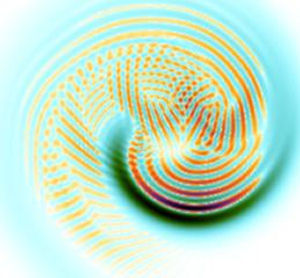 University of Miami researchers have found that crossing a quantum phase transition at just-the-right speed generates the richest, most complex light-matter entanglement - a characteristic evident in our Universe. Such structure resembles "defects" in an otherwise smooth and empty space. The findings are published in Physical Review A, the American Physical Society's main journal.

"Our findings suggest that the Universe was 'cooked' at just the right speeds," said professor of physics Neil Johnson. "Our paper provides a simple model that can be realized in a lab on a chip, to explore how such defect structure develops as the speed of cooking changes."

The study sheds new light on how to generate, control, and manipulate quantum entanglement, since the defects contain clusters of quantum entanglement of all sizes. The findings hold the key to a new generation of futuristic technologies - in particular, ultrafast quantum computing, quantum cryptography, high-precision quantum metrology, and even the quantum teleportation of information.

"Quantum entanglement is like the 'bitcoin' that funds the Universe in terms of interactions and information," Johnson said. "It is the magic sauce that connects together all objects in the Universe, including light and matter."

Johnson likes to compare the emergence of highly entangled light-matter structures, as the quantum phase transition is crossed, with the way lumps of porridge appear out of "nothing," when you heat up milk and oats. "If you cross the transition at the right speed (cook at right speed), the structures (lumps) that appear are far more complex - more 'tasty' - than when crossing fast or slow," said Johnson. "Since it is a quantum phase transition that is being crossed, the structures that appear contain clumps of quantum entanglement."

Johnson says the results of the study are robust for a wide range of system sizes, and the effect is realizable using existing experimental setups under realistic conditions. "This provides a unique opportunity to design and build new nanostructure systems that harness and manipulate quantum entanglement effects. The researchers are now looking at specifying the precise conditions that experimentalists will need in order to see the enhanced quantum entanglement effect that they predict."

Related:
Discuss this article in our forum
Entangled quarks hint at reconciliation of quantum mechanics and general relativity
Quasars at opposite ends of the Universe could close a loophole in quantum mechanics
Physicists map quantum to classical collapse
Mysterious "action at a distance" between liquids may be commonplace