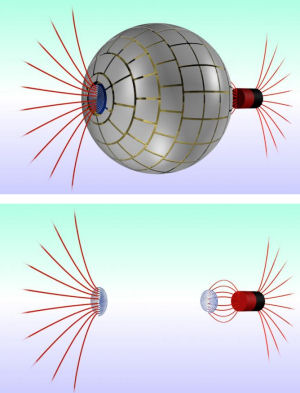 The wormhole in the experiment is a sphere made of different layers: an external layer with a ferromagnetic surface, a second inner layer, made of superconducting material, and a ferromagnetic sheet rolled into a cylinder that crosses the sphere from one end to the other. The sphere is made in such a way as to be magnetically undetectable - invisible, in magnetic field terms - from the exterior.

The magnetic wormhole is an analogy of gravitational ones, as it "changes the topology of space, as if the inner region has been magnetically erased from space", explains Alvar Sanchez, the lead researcher.

The breakthrough is a step forward towards possible applications in which magnetic fields are used, such as medicine. The technology could, for example, increase patients' comfort by distancing them from the detectors when having MRI scans in hospital, or allow MRI images of different parts of the body to be obtained simultaneously.

Related:
Discuss this article in our forum
New paper shows how spacetime is built from quantum entanglement
Mysterious "action at a distance" between liquids may be commonplace
Novel synchrotron X-ray generator could revolutionize security, medicine