"Intraterrestrial" life found in rocks below the seafloor. 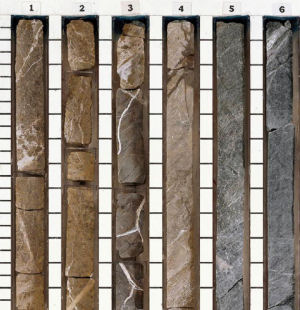 The discovery that ancient rocks harbored microbial life deep below the seafloor confirms a long-standing hypothesis that interactions between mantle rocks and seawater can create potential for life. The scientists behind the discovery, from the Woods Hole Oceanographic Institution (WHOI), Virginia Tech, and the University of Bremen, have reported their findings in the Proceedings of the National Academy of Sciences.

"We were initially looking at how seawater interacts with mantle rocks, and how that process generates hydrogen," said WHOI's Frieder Klein, lead author of the study. "But during our analysis of the rock samples, we discovered organic-rich inclusions that contained lipids, proteins and amino acids - the building blocks of life - mummified in the surrounding minerals."

The new study focused on mantle rocks that were originally exposed to seawater approximately 125 million years ago when a large rift split the massive supercontinent known as Pangaea. The rift, which eventually evolved into the Atlantic Ocean, pulled mantle rocks from Earth's interior to the seafloor, where they underwent chemical reactions with seawater, transforming the seawater into a hydrothermal fluid.

"The hydrothermal fluid likely had a high pH and was depleted in carbon and electron acceptors," Klein said. "These extreme chemical conditions can be challenging for microbes. However, the hydrothermal fluid contained hydrogen and methane and seawater contains dissolved carbon and electron acceptors. So when you mix the two in just the right proportions, you can have the ingredients to support life."

According to Dr. Everett Shock, a professor at Arizona State University's School of Earth and Science Exploration, the study underscores the influence major geologic processes can have on the prospect for life. "This research makes the connection all the way from convection of the mantle to the break-up of the continents to ultimately providing geochemical options for microbiology. It's just such a nice demonstration of real-world geobiology with a lot of 'geo' in it."

"Colonies of bacteria and archaea were feeding off the seawater-hydrothermal fluid mix and became engulfed in the minerals growing in the fractured rock," Klein said. "This kept them completely isolated from the environment. The minerals proved to be the ultimate storage containers for these organisms, preserving their lipids and proteins for over 100 million years."

"It's exciting that the research team was able to go back and examine samples that had been collected years ago for other reasons and find new discoveries," Shock added. "There will always be active new drilling, but this study raises the possibility of there being a lot more out there in the way of existing samples that could be analyzed."

In the lab, samples from the rock interior had to be extracted since the outside of the drill core was stored under non-sterile conditions. So Klein and his colleagues took a number of careful steps to ensure the integrity of the sample interior wasn't compromised, and then analyzed the rocks with high-resolution microscopes.

"I was stoked when I saw Dr. Schubotz's email detailing the analytical results," Klein said. "It was fascinating to find these particular biological substances - which had previously been found only at the Lost City hydrothermal field and in cold seeps - in rocks below the seafloor where life is extremely challenging. At that point we knew we were onto something really cool!"

"All the ingredients necessary to drive these ecosystems were made entirely from scratch," he said. "Similar systems have likely existed throughout most of Earth's history to the present day and possibly exist(ed) on other water-bearing rocky planetary bodies, such as Jupiter's moon Europa."

The study reinforces the idea that life springs up anywhere there is water, even in seemingly hostile geological environments - a tantalizing prospect as scientists find more and more water elsewhere in the solar system. But Klein contends that, while scientists have long understood many of the forces driving microbial life above the seafloor, there is still a great deal of uncertainty when it comes to understanding biogeochemical processes occurring in the oceanic basement.

"In the future, we'll be trying to learn more about these particular microorganisms and what the environmental conditions were in the mixing zone in that location. We also plan to go to different places where we think similar processes may have taken place, such as along the Newfoundland margin, and analyze samples to see if we find similar signatures. Broadening this research could provide additional insights about Earth's history and the search for life in the solar system."