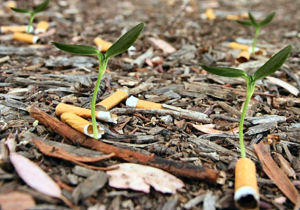 Despite the fact that nicotine insecticides were banned in 2009, European researchers say that high concentrations of nicotine are still detected in many plants. The journal Agronomy for Sustainable Development now reports that passive smoking and contaminated soils could be to blame for high levels of nicotine found in spices, herbal teas, and medicinal plants.

The research reveals, for the first time, that the reported high levels may indeed originate from tobacco. "Tremendously elevated nicotine levels were detected after fumigation with cigarette smoke," notes Selmar.

Selmar's team is also the first to show that peppermint plants can actually take up high concentrations of nicotine from contaminated soils. This follows the analysis of plants mulched with cigarette tobacco for more than nine days. The resulting nicotine concentrations are several times higher than the maximum residue level set by the European authorities.

"Our results suggest that the widespread occurrence of nicotine in medicinal, spice, and food plants may, at least in part, be due to other nicotine sources apart from the illegal use of insecticides," says Selmar.