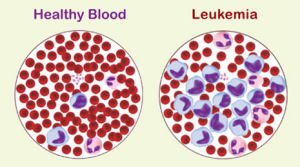 After a chance observation in the lab, Stanford researchers have identified a method that forces human leukemia cells to mature into harmless immune cells known as macrophages. The work is described in a paper that will be published in the Proceedings of the National Academy of Sciences.

Ravi Majeti, senior author of the paper, said the discovery was particularly exciting because the technique worked with B-cell acute lymphoblastic leukemia with a mutation called the Philadelphia chromosome - a particularly aggressive cancer with poor outcomes.

Majeti and his colleagues made the key observation after collecting leukemia cells from a patient and trying to keep the cells alive in a culture plate. "We were throwing everything at them to help them survive," explained Majeti. It was then the researchers noticed that some of the cancer cells were changing shape and size into what looked like macrophages.

The reason for the changed cells was a mystery, but Majeti found an old research paper, which showed that early B-cell mouse progenitor cells could be forced to become macrophages when exposed to certain transcription factors - proteins that bind to certain DNA sequences.

"B-cell leukemia cells are in many ways progenitor cells that are forced to stay in an immature state," Majeti said. So the team did more experiments and confirmed that methods shown to have altered the fate of the mouse progenitor cells years ago could be used to transform these human cancer cells into macrophages, which can engulf and digest cancer cells and pathogens.

Majeti and his colleagues hope that when the cancer cells become macrophages they will not only be neutralized, but may actually assist in fighting the cancer. Like a bloodhound owner who gives the dog a sniff of an object that was associated with the person or animal he wants to track, macrophage cells present recognizable bits of abnormal cells to other immune cells so that they can launch an attack. "Because the macrophage cells came from the cancer cells, they will already carry with them the chemical signals that will identify the cancer cells, making an immune attack against the cancer more likely," Majeti said.

The next steps will be to see if they can find a drug that will mimic the same reaction, which could serve as the basis for a therapy. There is some precedent for such a treatment. Retinoic acid is commonly used to treat another cancer called acute promyelocytic leukemia. In that case, retinoic acid is used to turn cancer cells into mature cells called granulocytes. This treatment is the only well-established therapy that matures, or "differentiates," cancer cells, but researchers around the world are hopeful of finding many more. "There's big-time interest in differentiation therapies for cancer," Majeti said.