You are here: Home › News › Space › Tiny vibrations could reveal extraterrestrial life
By Will Parker on December 31, 2014 in News, Space 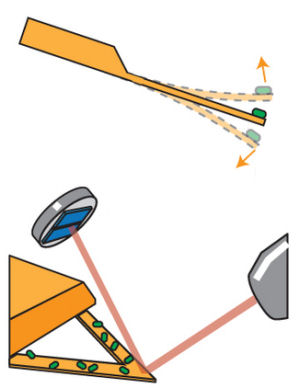 Looking for life on other planets is not straightforward. Usually, chemical detection is used, but such tests are limited in scope and might be completely irrelevant to esoteric alien biology.

Motion is a trait of all life, but detecting the tiny movements of microorganisms requires incredible sensitivity. Now, Swiss scientists say they have developed an extremely sensitive yet simple motion detector that can be built using existing technology. The system has accurately detected bacteria and cancer cells, and its inventors think it could also detect extraterrestrial life.

The scientists, Giovanni Dietler, Sandor Kasas, and Giovanni Longo (all from Ecole Polytechnique Federale de Lausanne (EPFL)), describe the device in the latestProceedings of the National Academy of Sciences.

The device uses a nano-sized cantilever (essentially a beam that is anchored only at one end) to detect motion. The idea comes from the technology behind the atomic force microscope, which uses a cantilever to produce pictures of the very atoms on a surface. The cantilever scans the surface like the needle of a record player and its up-and-down movement is read by a laser to produce an image.

The new motion sensor works the same way, but the sample is attached on the cantilever itself. If a bacterium is alive, it will inevitably move in some way, e.g. move its flagellum or simply carry out normal biological functions. That motion also moves the cantilever and this movement is captured using a reflected laser as a series of vibrations.

The EPFL scientists successfully tested their novel system with isolated bacteria, yeast, mouse, and human cells. In each case, they were able to accurately detect and isolate vibration signatures from living cells.

“The system has the benefit of being completely chemistry-free,” says Dietler. “That means that it can be used anywhere – in drug testing or even in the search for extraterrestrial life.”

The scientists envision a large array of cantilever sensors used in future space exploration probes like the Mars rover. As it relies on motion rather than chemistry, the cantilever sensor would be able to detect life forms in mediums that are native to other planets, such as the methane in the lakes of Titan. “This is really the next step,” says Dietler. “But we’re still calling ESA and NASA to see if they’re interested.”

Related:
Discuss this article in our forum
Locate alien civilizations by their pollution, suggest astrophysicists
Could heat from a Martian volcano create a habitable environment?
Comet smash simulations hint at life’s cosmic origins
First discovery of ET life will likely be around a white dwarf star, say astrophysicists

Its A Wonderful Life