Mysterious "action at a distance" between liquids may be commonplace 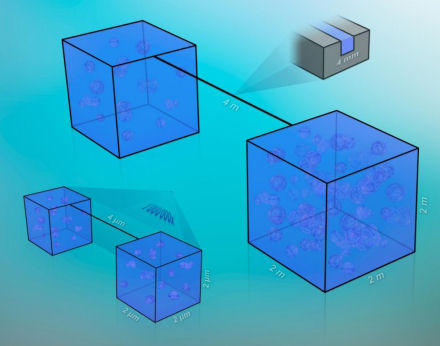 Back in 2010, researchers found that superfluid helium reservoirs stored in separate containers could behave collectively. Now, a new theoretical model reveals that the phenomenon of mysterious "action at a distance" between fluid reservoirs is much more common than previously thought.

The original discovery, made by a team from the University at Buffalo and the State University of New York, utilized an array of tens of millions of hollows for liquid helium on a silicon plate. Each small reservoir was a cube with an edge of two microns, and the centres of adjacent reservoirs were six microns apart. The prepared plate was covered with another full silicon plate. This was done so as to leave a very narrow gap - 32 nanometres - above the reservoirs.

The new theoretical model of the phenomenon, published in the journal Physical Review Letters, suggests that this effect may also be present in other liquids - and in much more typical conditions.

The scientists behind the new theory, Dr. Anna Maciolek of the Max-Planck-Institut for Intelligente Systeme and Prof. Douglas Abraham from Oxford University, say that; "superfluid helium has properties that are to a large extent the result of quantum phenomena, so initially it seemed that it was those that were responsible for the outcome of the experiment." But their new model shows that the effect of action-at-a-distance; "does not require quantum physics and can also occur in classical one-component fluids, as well as in mixtures."

Their theoretical model suggests that for the phenomenon to occur, the right conditions must be present. In the original experiment, the liquid helium needed to be at a state close to the appearance (or disappearance) of superfluidity. For other fluids, however, low temperatures are not required. Water and lutidine - a mixture of water and oil - mix only in a certain range of temperatures and action-at-a-distance only appears within this range.

"The most important requirement therefore turns out to be the proximity of the phase transition, that is, the state in which the two different phases of the liquid occur simultaneously," explained Dr. Maciolek.

Interestingly, the dimensions of the reservoirs and the connecting channels are also important: the phenomenon ceases to exist when the distances are significantly larger than the size of human cells. "Physics in the microworld, even classical physics, is turning out, not for the first time, to be different from the physics we all know from everyday life," observed Dr. Maciolek.

She added that the findings should inform the design of a range of microfluidic systems, the most well known example being the lab-on-a-chip analysis platforms being developed for medicine and biology. "Action-at-a-distance can occur - as an unintended effect, disturbing the results of experiments, or as an intentionally introduced factor increasing the functionality of the system," she concluded.