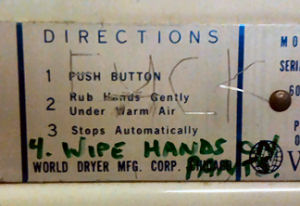 Scientists from the University of Leeds (UK) have discovered that airborne germ counts are 27 times higher around air dryers in comparison with the air around paper towel dispensers. Their study, published in the Journal of Hospital Infection, shows that both jet and warm air hand dryers spread bacteria into the air and onto users and those nearby.

To mimic hands that had been poorly washed, the research team contaminated the subjects' hands with Lactobacillus , a harmless type of bacteria. The researchers then collected air samples around the hand dryers and also at distances of one and two meters away.

"These findings are important for understanding the ways in which bacteria spread, with the potential to transmit illness and disease," said Professor Mark Wilcox, who led the study. "Next time you dry your hands in a public toilet using an electric hand dryer, you may be spreading bacteria without knowing it. You may also be splattered with bugs from other people's hands."