You are here: Home › Humans › News › How long can our technological civilization last?
By Will Parker on November 7, 2014 in Humans, News 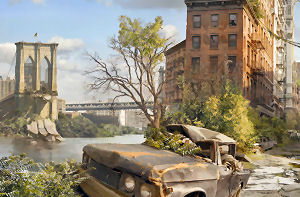 By combining the Earth-based science of sustainability with the space-oriented field of astrobiology, two astrophysicists are attempting to answer questions about humanity’s future in the broadest astronomical context.

In their paper, which appears in the journalAnthropocene, Adam Frank and Woodruff Sullivan (both from the University of Rochester) propose that climate change, ocean acidification, and species extinctions may be a natural and generic consequence of certain evolutionary pathways.

“We have no idea how long a technological civilization like our own can last,” says Frank. “Is it 200 years, 500 years or 50,000 years? Answering this question is at the root of all our concerns about the sustainability of human society. Are we the first and only technologically-intensive civilization in the entire history of the universe? If not, shouldn’t we stand to learn something from the past successes and failures of these other species?”

To frame these questions, Frank and Sullivan begin with the famous Drake equation, a formula used to estimate the number of intelligent societies in the universe. In their treatment of the equation, the authors concentrate on the average lifetime of a Species with Energy-Intensive Technology (SWEIT). Frank and Sullivan calculate that even if the chances of forming such a “high tech” species are 1 in a 1,000 trillion, there will still have been 1,000 occurrences of a history like own on planets across the local region of the cosmos. 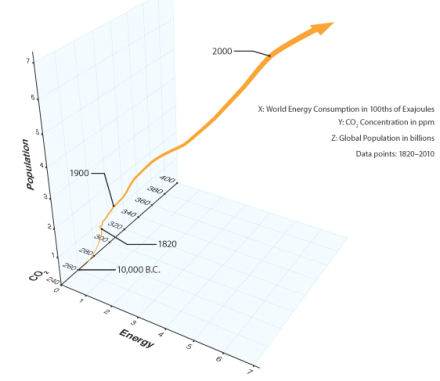 “That’s enough to start thinking about statistics,” says Frank, “like what is the average lifetime of a species that starts harvesting energy efficiently and uses it to develop high technology.”

Using dynamical systems theory, the authors map out a strategy for modeling the trajectories of various SWEITs through their evolution. The authors show how the developmental paths should be strongly tied to interactions between the species and its host planet. As the species’ population grows and its energy harvesting intensifies, for example, the composition of the planet and its atmosphere may become altered for long timescales.

Frank and Sullivan show how habitability studies of exoplanets hold important lessons for sustaining the civilization we have developed on Earth. This astrobiological perspectivecasts sustainability as a place-specific subset of habitability, or a planet’s ability to support life. While sustainability is concerned with a particular form of life on a particular planet, astrobiology asks the bigger question: what about any form of life, on any planet, at any time? 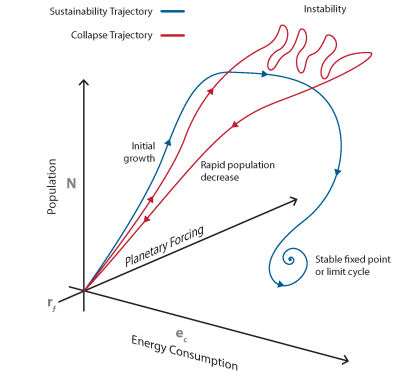 “We don’t yet know how these other life forms compare to the ones we are familiar with here on Earth. But for the purposes of modeling average lifetimes,” Frank explains, “it doesn’t matter. If they use energy to produce work, they’re generating entropy. There’s no way around that, whether their human-looking Star Trek creatures with antenna on their foreheads, or they’re nothing more than single-cell organisms with collective mega-intelligence. And that entropy will almost certainly have strong feedback effects on their planet’s habitability, as we are already beginning to see here on Earth.”

The authors propose that every intelligent species may run into this bottleneck, and that this could be a universal feature of life and planets. “If that’s true,” argues Frank, “the question becomes whether we can learn anything by modeling the range of evolutionary pathways. Some paths will lead to collapse and others will lead to sustainability. Can we, perhaps, gain some insight into which decisions lead to which kind of path?”

Tea flavors changing with shifting rainfall patterns
Marijuana’s long-term effects on the brain: do you want the good news or the bad news?