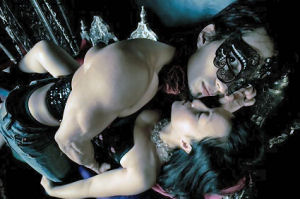 What constitutes an “unusual” sexual fantasy? Canadian researchers have just published a study that attempts to answer that question, describing in the Journal of Sexual Medicine exactly how common a variety of sexual fantasies are.

“Clinically, we know what pathological sexual fantasies are: they involve non-consenting partners, they induce pain, or they are absolutely necessary in deriving satisfaction. But apart from that, what exactly are abnormal or atypical fantasies? To find out, we asked people in the general population,” said the University of Montreal’s Christian Joyal, lead author of the study. “Our main objective was to specify norms in sexual fantasies, an essential step in defining pathologies. And as we suspected, there are a lot more common fantasies than atypical fantasies.”

“Overall, these findings allow us to shed light on certain social phenomena, such as the popularity of the book Fifty Shades of Grey with women,” Joyal concluded. “The subject is fascinating. We are currently conducting statistical analyses with the same data to demonstrate the existence of homogeneous subgroups of individuals based on combinations of fantasies. For example, people who have submission fantasies also often report domination fantasies. These two themes are therefore not exclusive, quite the contrary. They also seem associated with a higher level of satisfaction.”

Related:
Discuss this article in our forum
Study suggests the war on drugs might really be a war on sex
Empirical evidence for homophobia’s link to repressed same-sex attraction
Cougar sex drive an evolutionary adaptation
Sex appeal as important as education?