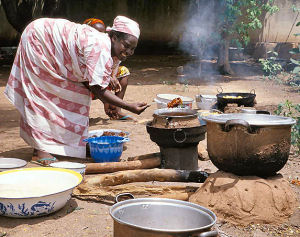 The investigation simulated cooking by boiling mildly acidic solutions in the cookware for two hours and measuring the lead extracted in solution. The team found that a typical serving contained almost 200 times more lead than California's maximum allowable dose level of 0.5 micrograms per day. The researchers also found significant levels of aluminum and cadmium leached from the cookware.

"These locally made aluminum pots are the most commonly used in Cameroon and throughout Africa, so the lead levels we found are alarming and a threat to public health," said Gilbert Kuepouo, Executive Director of CREPD and one of the study's authors.

"This previously unrecognized lead exposure source has the potential to be of much greater public health significance than lead paint or other well-known sources that are common around the world," added co-author Perry Gottesfeld.

"Unlike some other sources of lead contamination, lead poisoning from cookware can impact entire families over a life-time. Even low-level lead exposures can result in reduced IQ and neurological deficits," concluded Ashland University's Jeffrey Weidenhamer.