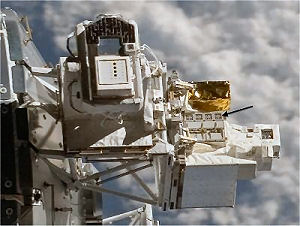 Scientists conducting a series of experiments on the International Space Station say that some micro-organisms can survive for long periods exposed to the hostile environment of outer space. The findings, published in the Astrobiology Journal, lend weight to the concept of panspermia, where life on Earth emerged from bacterial colonies transported on comets and asteroids.

The experiments were designed to see whether bacterial hitchhikers on spacecraft were hardy enough to survive in space and contaminate other planets. Currently, spacecraft landing on Mars or other planets where life might exist must meet requirements for a maximum allowable level of microbial life (known as bioburden). These acceptable levels were based on studies of how various life forms survive exposure to the rigors associated with space travel.

"If you are able to reduce the numbers to acceptable levels, a proxy for cleanliness, the assumption is that the life forms will not survive under harsh space conditions," explains NASA's Kasthuri J. Venkateswaran. But that assumption may not hold up, as it seems some microbes are hardier than expected.

"We wanted to see what would happen in real space, and EuTEF gave us the chance," says Venkateswaran. "To our surprise, some of the spores survived for 18 months." 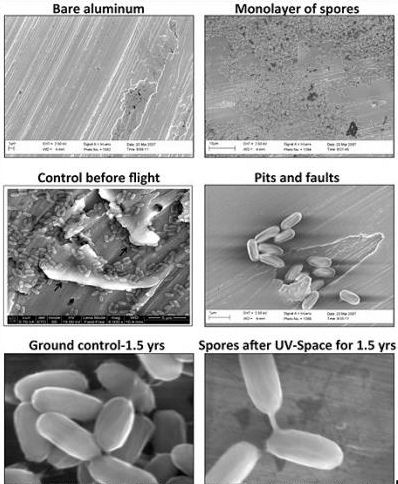 In this scenario, rocks ejected from a planet by impact with, for example, a meteor, carried organisms on their surface through space and then landed on another planet, bringing that life with them. For this investigation, researchers selected organisms especially adapted to cope with the environmental extremes of their natural habitats on Earth, and found that some are also able to survive in the even more hostile environment of outer space. Lithopanspermia would require thousands or even millions of years, much longer than the experiment's duration, but the results provide the first evidence of the hardiness of these organisms in space and suggest the possibility that space-traveling rocks could carry life between planets.