An international team of astronomers have announced the discovery of a new rocky planet the same size as Earth that could have liquid water on its surface. The potentially habitable planet, dubbed Kepler-186f, was discovered using data from NASA's Kepler telescope and verified by the Gemini and Keck telescopes.

"What makes this finding particularly compelling is that this Earth-sized planet, one of five orbiting this star, which is cooler than the Sun, resides in a temperate region where water could exist in liquid form," says NASA's Elisa Quintana, lead author of a paper describing the exoplanet in the journal Science.

Kepler-186f is the fifth and outermost planet discovered orbiting around the dwarf star Kepler-186. The planets were discovered by the transit method, which detects potential planets as their orbits cross in front of their star and cause a very tiny but periodic dimming of the star's brightness. The system is around 500 light years distant from Earth in the constellation of Cygnus.

"The temperature on the planet is strongly dependent on what kind of atmosphere the planet has," said Thomas Barclay, research scientist at the Bay Area Environmental Research Institute at Ames, and co-author of the paper. "Kepler-186f can be thought of as an Earth-cousin rather than an Earth-twin. It has many properties that resemble Earth." 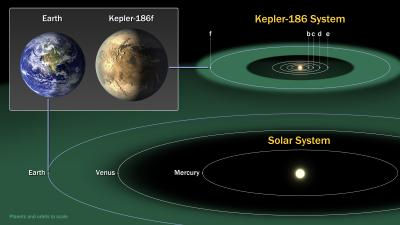 "Kepler-186f's orbit at the outer edge of the habitable zone around its star could mean that any liquid surface water would be in danger of freezing," noted San Francisco State University astronomer Stephen Kane, who also co-authored the paper. "However, it is also slightly larger than the Earth, and so the hope would be that this would result in a thicker atmosphere that would provide extra insulation and make the surface warm enough to keep water liquid."

Although Kepler-186f shows exciting signs of being Earth-like, Kane points out that its differences are also fascinating. "We're always trying to look for Earth analogs, and that is an Earth-like planet in the habitable zone around a star very much the same as our Sun," said Kane, who is the chair of Kepler's Habitable Zone Working Group. "This situation is a little bit different, because the star is quite different from our Sun."

Kepler-186 is an M-dwarf star, much smaller and cooler than the Sun. These stars are numerous in our galaxy, and have some features that make them promising places to look for life. "For example, small stars live a lot longer than larger stars," Kane explained, "and so that means there is a much longer period of time for biological evolution and biochemical reactions on the surface to take place."