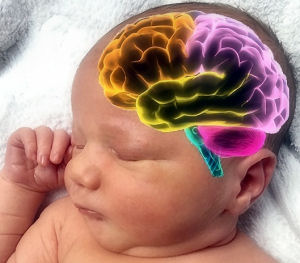 Babies whose mothers were exposed during pregnancy to stressors such as trauma, illness, alcohol, or drug abuse become susceptible to various psychiatric disorders later in life. Now, researchers think that it may be the stressor's effect on single gene that gives rise to conditions such as schizophrenia, PTSD, autism, and bipolar disorders.

Specifically, the researchers found that mouse embryos exposed to alcohol, methyl-mercury, or maternal seizures all activate in the developing brain cells a single gene - HSF1- which protects and enables some of the brain cells to survive prenatal insult. Mice lacking the HSF1 gene showed structural brain abnormalities and were prone to seizures after birth, even after exposure to very low levels of the toxins.

In addition, the researchers created stem cells from biopsies of individuals diagnosed with schizophrenia. Genes from these "schizophrenic" stem cells responded more dramatically when exposed to environmental insults than stem cells obtained from non-schizophrenic individuals. The findings provide support to the notion that stress induces vulnerable cells to malfunction.