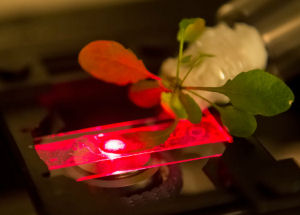 Researchers from the Massachusetts Institute of Technology (MIT) report boosting plants' ability to capture light energy by 30 percent by embedding carbon nanotubes in the chloroplast, the part of the plant where photosynthesis takes place. The new field of "plant nanobionics" could, according to the research team, create plants with enhanced energy production that are a hybrid of electronic circuits and biological systems. Details of the research appear in the journal Nature Materials.

"Plants are very attractive as a technology platform," says Michael Strano, the leader of the research team. "They repair themselves, they're environmentally stable outside, they survive in harsh environments, and they provide their own power source and water distribution."

The idea for nanobionic plants grew out of a project in Strano's lab to build self-repairing solar cells modeled on plant cells. As a part of that work, the researchers wanted to try enhancing the photosynthetic function of chloroplasts isolated from plants, for possible use in solar cells.

Chloroplasts do all the work needed for photosynthesis, which occurs in two stages. During the first stage, pigments such as chlorophyll absorb light, which excites electrons that flow through the thylakoid membranes of the chloroplast. The plant captures this electrical energy and uses it to power the second stage of photosynthesis - building sugars.

Chloroplasts can still perform these reactions when removed from plants, but after a few hours, they start to break down because light and oxygen damage the photosynthetic proteins. Usually, plants can completely repair this kind of damage, but extracted chloroplasts can't do it on their own.

To prolong the chloroplasts' productivity, the researchers embedded them with cerium oxide nanoparticles, also known as nanoceria. These particles are very strong antioxidants that scavenge oxygen radicals and other highly reactive molecules produced by light and oxygen, protecting the chloroplasts from damage.

Using the same delivery technique, the researchers also embedded semiconducting carbon nanotubes, coated in negatively charged DNA, into the chloroplasts. Plants typically make use of only about 10 percent of the sunlight available to them, but Strano hypothesized that the carbon nanotubes could allow chloroplasts to capture wavelengths of light not in their normal range, such as ultraviolet, green, and near-infrared. The researchers found that photosynthetic activity was 49 percent greater than that in isolated chloroplasts without embedded nanotubes.

The researchers then turned to living plants and used a technique called vascular infusion to deliver nanoparticles into Arabidopsis thaliana, a small flowering plant. The nanotubes moved into the chloroplast and boosted photosynthetic electron flow by about 30 percent.

The researchers also showed that they could turn Arabidopsis thaliana plants into chemical sensors by delivering carbon nanotubes that detect the gas nitric oxide, an environmental pollutant produced by combustion. By adapting the sensors to different targets, the researchers hope to develop plants that could be used to monitor environmental pollution, pesticides, fungal infections, or exposure to bacterial toxins. They are also working on incorporating electronic nanomaterials, such as graphene, into plants.