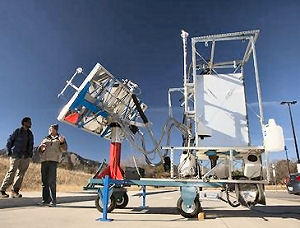 The energy generated by the Sun and transferred to the fiber-optic cable system can heat up the reaction chamber to over 600 degrees Fahrenheit to treat the waste material and turn it into biochar. "While the idea of concentrating solar energy is not new, transmitting it flexibly to a customizable location via fiber-optic cables is the really unique aspect of this project," explained the privy's co-developer Karl Linden, a professor of environmental engineering at CU-Boulder.

Linden's team is one of 16 around the world funded by the Gates' "Reinvent the Toilet Challenge" that have now shipped their inventions to Delhi, where they will be on display next week for scientists, engineers, and dignitaries.