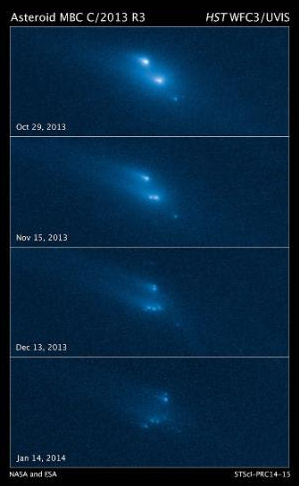 "Seeing this rock fall apart before our eyes is pretty amazing," said David Jewitt, a professor in the UCLA Department of Earth, Planetary and Space Sciences, who led the astronomical forensics investigation.

The crumbling asteroid, designated P/2013 R3, was first noticed as an anomalous, fuzzy-looking object on September 15, 2013, by the Catalina and Pan-STARRS sky-survey telescopes. A follow-up observation on October 1 with the W.M. Keck telescope on Hawaii's Mauna Kea revealed three co-moving bodies embedded in a dusty envelope that is nearly the diameter of Earth. "The Keck telescope showed us that this asteroid was worth looking at with Hubble," Jewitt said.

This leaves a scenario in which the asteroid is disintegrating due to a subtle effect of sunlight, which causes the rotation rate to slowly increase. Eventually, its component pieces, like grapes on a stem, gently pull apart due to centrifugal force, Jewitt explained. The possibility of disruption by this so-called "YORP torque" has been discussed by scientists for several years but, so far, never reliably observed.

With Hubble's recent discovery of an active asteroid spouting six tails, astronomers are seeing more circumstantial evidence that the pressure of sunlight may be the primary force that disintegrates small asteroids.

The asteroid's remnant debris, weighing in at 200,000 tons, will provide a rich source of meteoroids, according to Jewitt. "Most will eventually plunge into the Sun, but a small fraction of the debris may one day enter the Earth's atmosphere to blaze across the sky as meteors," he said.