You are here: Home › Medicine › News › Stress hormone a key player in financial crises
By Will Parker on February 17, 2014 in Medicine, News 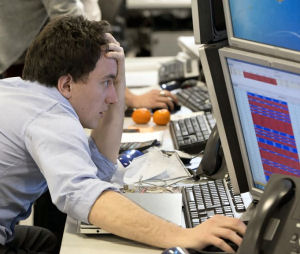 Scientists studying levels of the stress hormone cortisol in financial traders say that appetite for risk may be “physiologically-driven” by the body’s response to cortisol and that stress could be a trigger for market instability. Published in the journalProceedings of the National Academy of Sciences, the new study is the first to show that personal financial risk preferences fluctuate substantially, and these fluctuations may be linked to hormone response.

Cortisol is a hormone secreted by the adrenal glands in response to moments of high physical stress, such as “fight or flight.” Importantly, cortisol also rises powerfully in situations of uncertainty, such as volatility in the financial markets.

The findings, by researchers at the University of Cambridge, could fundamentally alter our understanding of risk. “Up until now, almost every model in finance and economics – even those used by banks and central banks – rested on the assumption that traders’ personal risk preferences stay consistent across the market cycle,” said John Coates, co-lead author of the study.

In a previous study conducted with traders in the City of London, researchers observed that cortisol levels rose 68 percent over a two week period when market volatility increased. In the latest study, the researchers combined field work with lab work, a rare approach in economics, to test for the effects of this elevated cortisol on financial risk-taking.

The researchers administered hydrocortisone – the pharmaceutical form of cortisol – to 36 volunteers, 20 men and 16 women, aged 20 to 36 years, over an eight day period, raising their cortisol levels 69 percent: almost exactly the levels seen in the traders.

The volunteers then took part in lottery-style financial risk-taking tasks with real monetary pay-offs, designed to measure the preferences for risky gambles and the judgments of probability underlying their risk taking.

While initial spikes of cortisol had little effect on behavior, chronically high and sustained levels, as seen in traders, led to a dramatic drop in participants’ willingness to take risks, with the “risk premium” – the amount of extra risk someone will tolerate for the possibility of higher return – falling by 44 percent.

“Any trader knows that their body is taken on rollercoaster ride by the markets. What we haven’t known until this study was that these physiological changes – the sub-clinical levels of stress of which we are only dimly aware – are actually altering our ability to take risk,” said Coates. “It is frightening to realize that no one in the financial world – not the traders, not the risk managers, not the central bankers – knows that these subterranean shifts in risk appetite are taking place.”

The study’s authors also looked for differences between men and women. While other researchers have argued that women are more risk averse than men, the current study found no differences between the sexes under normal circumstances. However, the study did find that, when exposed to chronically-raised levels of cortisol, men placed too much importance on smaller risks, while women did not.

The authors point out that during the Global Financial Crisis of 2008, volatility in US equities spiked from 12 percent to over 70 percent. They argue that such historically high levels of uncertainty would have caused stress hormones to rise far higher and last far longer than in the study.

“Physiologically-driven shifts in risk preferences may be a source of financial market instability that hasn’t been considered by economists, risk managers and central bankers alike. Traders, risk managers, and central banks cannot hope to manage risk if they do not understand that the drivers of risk taking lurk deep in our bodies,” said Coates.

Related:
Discuss this article in our forum
Capitalism on the couch: psychoanalyzing the credit crisis
Stock prices can be predicted, say math researchers
A bad boss can cripple your immune system