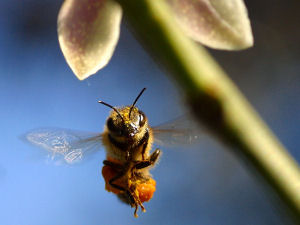 The scientists who discovered that urban bees are using plastic bags and building sealant to construct hives say it demonstrates bees' resourcefulness and flexibility in adapting to a human-dominated world.

The study, published in the journal Ecosphere, was carried out by University of Guelph researchers Scott MacIvor and Andrew Moore. MacIvor says it's an important discovery because; "although researchers have shown adverse impacts of the material on species and the ecosystem, few scientists have observed insects adapting to a plastic-rich environment."

Figuring out that the bees were using plastics in place of natural materials took some detective work. It all began when Moore analyzed a grey "goo" that MacIvor had discovered in the nests of one kind of bee, Megachile campanulae, which normally uses plant resins to build its nests. "Scott thought it might be chewing gum originally," Moore said.

Further analysis showed that the bees chewed the plastic differently than they did leaves, suggesting that the insects had not mistakenly collected the plastic. "The plastic materials had been gathered by the bees, and then worked - chewed up and spit out like gum - to form something new that they could use," Moore said.