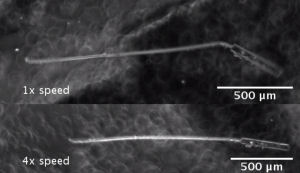 Powered by cultured heart cells, tiny, self-organizing bio-hybrid machines that swim like sperm have been created by scientists at the University of Illinois. A report on the synthetic self-propelled bio-bots appears in the journal Nature Communications.

"Micro-organisms have a whole world that we only glimpse through the microscope," said Taher Saif, lead scientist on the project. "This is the first time that an engineered system has reached this underworld."

The bio-bots are modeled after flagella, single-celled creatures with long tails. The body of the bio-bot is created from a flexible polymer and it is powered by heart cells cultured near the junction of the head and the tail. The cells self-align and synchronize to beat together, sending a wave down the tail that propels the bio-bot forward.

"This self-organization is a remarkable emergent phenomenon," said Saif. How the cells communicate with each other on the flexible polymer tail is yet to be fully understood. But the cells must beat together, in the right direction, for the tail to move. "It's the minimal amount of engineering... the cells come in, interact with the structure, and make it functional." 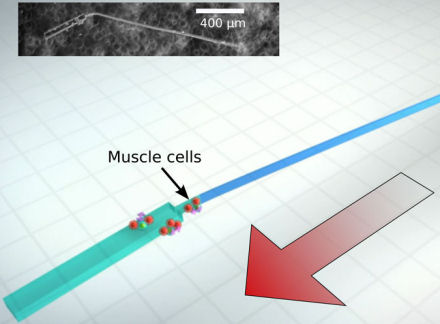 The team also built two-tailed bots, which they found can swim even faster. The study suggests that multiple tails also open up the possibility of directional control. The researchers envision future bots that could sense chemicals or light and navigate toward a target for medical or environmental applications.

"The long-term vision is simple," said Saif. "We make elementary structures and seed them with stem cells that would differentiate into smart structures to deliver drugs, perform minimally invasive surgery or target cancer."