You are here: Home › Medicine › News › Study reveals how ecstasy triggers euphoria
By Will Parker on January 19, 2014 in Medicine, News 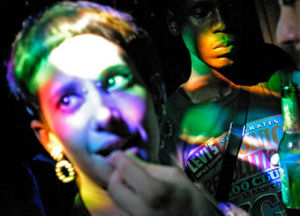 A study in the journal Biological Psychiatryreveals for the first time how the illicit drug ecstasy (3,4-methylenedioxy-N-methylamphetamine (MDMA)) produces feelings of euphoria in users. The researchers, from Imperial College London, say their findings hint at ways that ecstasy might be used in the treatment of anxiety and post-traumatic stress disorder (PTSD). MDMA has previously been investigated as an adjunct to psychotherapy in the treatment of PTSD, with a recent study in the US reporting positive results.

Although MDMA has been a popular recreational drug since the 1980s, there has been little research on precisely which areas of the brain it affects. The new study is the first to use functional magnetic resonance imaging to scan the brains of subjects under its influence.

The scans indicated that MDMA decreases activity in the limbic system – a set of brain structures involved in emotional responses. Additionally, communication between the medial temporal lobe and medial prefrontal cortex, which is involved in emotional control, was reduced. This effect and the drop in activity in the limbic system are opposite to the patterns seen in patients who suffer from anxiety.

Researcher Robin Carhart-Harris added that MDMA also increased communication between the amygdala and the hippocampus. Past studies on patients with PTSD have found a reduction in communication between these two areas. “We found that MDMA caused reduced blood flow in regions of the brain linked to emotion and memory,” he explained. “These effects may be related to the feelings of euphoria that people experience on the drug.”

As part of the study, the volunteers were asked to recall their favorite and worst memories while inside the scanner. The researchers say the subjects rated their favorite memories as more vivid, emotionally intense and positive after MDMA than placebo, and they rated their worst memories less negatively. This was reflected in the way that parts of the brain were activated more or less strongly under MDMA.

“MDMA seems to lessen the impact of painful memories,” said Carhart-Harris. “This fits with the idea that it could help patients with PTSD revisit their traumatic experiences in psychotherapy without being overwhelmed by negative emotions.”

Study leader David Nutt said the findings do suggest possible clinical uses for MDMA in treating anxiety and PTSD, but “we need to be careful about drawing too many conclusions from a study in healthy volunteers. We would have to do studies in patients to see if we find the same effects.”

Related:
Discuss this article in our forum
Quantifying A Mystical Experience: Hallucinogenic Research Gets To Grips With Spirituality
Ecstasy’s empathogenic properties revealed to be a sham
Study finds no brain damage among ecstasy users
Disco Rats Last Longer On Ecstasy