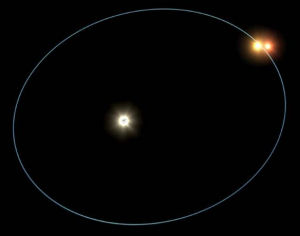 Astronomers have discovered a unique stellar system of two white dwarf stars and a superdense neutron star, all packed within a space smaller than Earth's orbit around the Sun. The closeness of the stars allows the scientists to make the most accurate measurements yet of the system's complex gravitational interactions, measurements that might resolve one of the principal outstanding problems of fundamental physics - the true nature of gravity.

"This triple system gives us a natural cosmic laboratory far better than anything found before for learning exactly how such three-body systems work and potentially for detecting problems with General Relativity that physicists expect to see under extreme conditions," said Scott Ransom of the National Radio Astronomy Observatory. He was part of an international team of researchers that reported their observations of the system in the journal Nature. 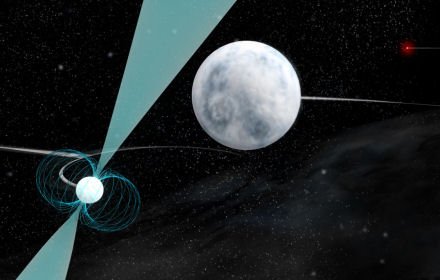 "This is the first millisecond pulsar found in such a system, and we immediately recognized that it provides us a tremendous opportunity to study the effects and nature of gravity," Ransom said. "The gravitational perturbations imposed on each member of this system by the others are incredibly pure and strong. The millisecond pulsar serves as an extremely powerful tool for measuring those perturbations incredibly well."

By very accurately recording the time of arrival of the pulsar's pulses, the scientists were able to calculate the geometry of the triple system and the masses of the stars with unparalleled precision.

The most famous experiments illustrating the equivalence principle are Galileo's reputed dropping of two balls of different weights from the Leaning Tower of Pisa and Apollo 15 astronaut Dave Scott's dropping of a hammer and a feather while standing on the airless surface of the Moon in 1971.

"While Einstein's Theory of General Relativity has so far been confirmed by every experiment, it is not compatible with quantum theory. Because of that, physicists expect that it will break down under extreme conditions," Ransom explained. "This triple system of compact stars gives us a great opportunity to look for a violation of a specific form of the equivalence principle called the Strong Equivalence Principle."

When a massive star explodes as a supernova and its remains collapse into a superdense neutron star, some of its mass is converted into gravitational binding energy that holds the dense star together. The Strong Equivalence Principle says that this binding energy still will react gravitationally as if it were mass. Virtually all alternatives to General Relativity hold that it will not. "This system offers the best test yet of which is the case," Ransom said.

"By doing very high-precision timing of the pulses coming from the pulsar, we can test for such a deviation from the strong equivalence principle at a sensitivity several orders of magnitude greater than ever before available," said co-researcher Ingrid Stairs, from the University of British Columbia. "Finding a deviation from the Strong Equivalence Principle would indicate a breakdown of General Relativity and would point us toward a new, correct theory of gravity."