You are here: Home › News › Space › Water vapor seen gushing from Europa
By Will Parker on December 12, 2013 in News, Space 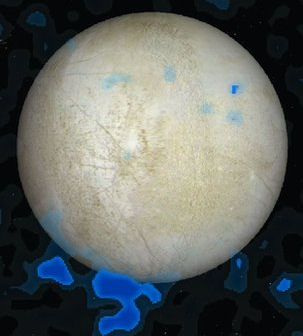 The Hubble Space Telescope has discovered water vapor erupting from the south pole of Jupiter’s moon Europa. Astronomers have long suspected that Europa harbors a liquid ocean beneath its icy crust, and the new images are the first observational evidence of the existence of water on the moon. But whether the water is coming from a subsurface ocean is still unknown, with the Hubble team conceding that the water may simply be coming from ice warmed by frictional stresses.

Europa’s water plumes were discovered by Hubble’s Space Telescope Imaging Spectrograph, which detected faint ultraviolet light from an aurora at the moon’s south pole. This aurora is driven by Jupiter’s intense magnetic field, which causes particles to reach such high speeds that they can split the water molecules in the plume when they hit them, resulting in oxygen and hydrogen ions which leave their telltale imprint in the colours of the aurora.

The discovery makes Europa only the second moon in the solar system known to have water vapour plumes. In 2005, plumes of water vapour and dust were detected by NASA’s Cassini orbiter spewing off the surface of the Saturnian moon Enceladus. So far, only water vapour has been detected on Europa – unlike the plumes on Enceladus, which also contain ice and dust particles.

Interestingly, the Hubble team found that the intensity of the plumes varies with Europa’s orbital position. Active geysers have only been seen when the moon is furthest from Jupiter, while the researchers could not detect any sign of venting when Europa is closest to Jupiter.

One possible explanation is that the moon experiences varying tidal forces at different points in its orbit, opening and closing vents on Europa’s surface. The tidal stresses compress the vents at the south pole region when Europa is closest to Jupiter, and stretch them when Europa is furthest away, making it possible for the vents to open up.

Hubble team member Kurt Retherford says this plume variability supports a key prediction that we should see this kind of tidal effect if there is a subsurface ocean on Europa. But although the new discovery bolsters the notion of liquid water beneath the surface, many questions remain. “How thick is the ice crust?” Retherford wonders. “Are there lakes and ponds embedded within the layers of the ice? Do these cracks go down really deep, do they really touch the liquid water down below? We don’t know all of these things.”