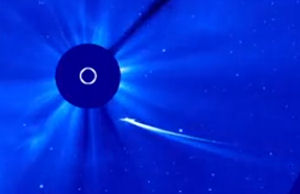 Comet ISON, which was due to emerge from behind the Sun today, has failed to appear, indicating that the comet has broken up and evaporated during its close encounter with the Sun.

Several solar observatories watched the comet throughout this closest approach to the sun, known as perihelion. While the fate of the comet is not yet established, NASA scientists say it is likely that it did not survive the trip.

“We didn’t see Comet ISON in SDO [NASA’s Solar Dynamics Observatory],” said Dean Pesnell, project scientist for SDO. “We think it must have broken up and evaporated before it reached perihelion.”

While this means that Comet ISON will not be visible in the night sky in December, the wealth of observations gathered over the last year while the comet was on approach will provide great research opportunities for some time.

Thanksgiving close encounter looms for comet ISON
“I’m back!” Comet ISON hangs on in there