As the comet ISON heads toward its closest approach to the Sun tomorrow (Nov. 28), scientists have been trying to work out if the comet might already have broken up from the intense heat and gravitational forces of the Sun. 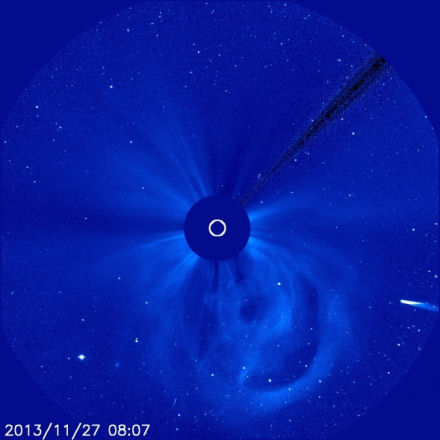 The latest image, taken by the ESA/NASA Solar Observatory, shows the comet entering from the lower right; while a giant coronal mass ejection is seen billowing out under the Sun.

NASA scientists say the comet is too far away to directly observe whether or not it has broken up. Instead, they are measuring its brightness to try and infer its current state. Less light can sometimes mean that more of the material has boiled off and disappeared, perhaps pointing to a disintegrated comet.

Observations so far have suggested ISON was getting dimmer and might already be in pieces. However, in the pictures from today, the comet once again appears to brighten.

If the comet has already broken up, it will likely disintegrate completely as it makes its slingshot around the Sun. Whilst this would mean there would be no comet visible in the night sky in December, it would provide a great opportunity for scientists to scrutinize the remains and better understand its composition. Whatever the case, it's now a waiting game. "We'll only know for sure after the comet rounds the Sun on Thanksgiving Day," say NASA.