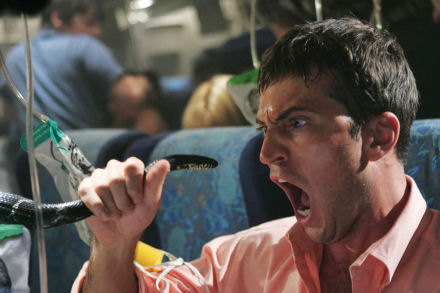 A new study published in the journal Proceedings of the National Academy of Sciences appears to confirm a theory that the evolution of sharp vision in our ancestors was in part driven by the threat of snakes.

Isbell's book explains that modern mammals and snakes big enough to eat them evolved at about the same time, 100 million years ago. Venomous snakes are thought to have appeared about 60 million years ago - "ambush predators" that have since then shared the trees and grasslands with primates.

Nishijo's lab studies the neural mechanisms responsible for emotion and fear in rhesus macaque monkeys. In this case, instinctive responses that occur without learning or memory. The monkeys tested in the new study were reared in a walled colony and had not previously encountered a snake.

"The snake-sensitive neurons were more numerous, and responded more strongly and rapidly, than other nerve cells that fired in response to images of macaque faces or hands, or to geometric shapes," said Nishijo. "The results show that the [macaque] brain has special neural circuits to detect snakes, and this suggests that the neural circuits to detect snakes have been genetically encoded."

Commenting on Nishijo's findings, Isbell said she was surprised that more neurons responded to snakes than to faces, given that primates are highly social animals. "We're finding results consistent with the idea that snakes have exerted strong selective pressure on primates," she added. "I don't see another way to explain the sensitivity of these neurons to snakes except through an evolutionary path."