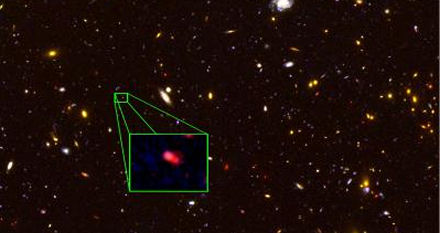 Newly discovered galaxy z8-GND-5296 is providing astronomers with an intriguing glimpse of what the universe was like when it was only about 700 million years old - 13.1 billion years ago.

"We were thrilled to see this galaxy," said Steven Finkelstein at the University of Texas at Austin. "And then our next thought was, 'Why did we not see anything else? We're using the best instrument on the best telescope with the best galaxy sample. We had the best weather - it was gorgeous. And still, we only saw this emission line from one of our sample of 43 observed galaxies, when we expected to see around six. What's going on?'"

This, scientists believe, is one of two major changes in the fundamental essence of the universe since its beginning - the other being a transition from a plasma state to a neutral state. "Everything seems to have changed since then," explained team member Vithal Tilvi, from Texas A&M University. "If it was neutral everywhere today, the night sky that we see wouldn't be as beautiful. What I'm working on is studying exactly why and exactly where this happened. Was this transition sudden, or was it gradual?"

Tilvi adds that the new titleholder is unlikely to hang onto its crown for long, with the construction and commissioning of larger ground-based telescopes - the Thirty Meter Telescope in Hawai'i and Giant Magellan Telescope in Chile - and the 6.5 meter James Webb Space Telescope in space that should enable scientists to find many more such galaxies at even larger distances.