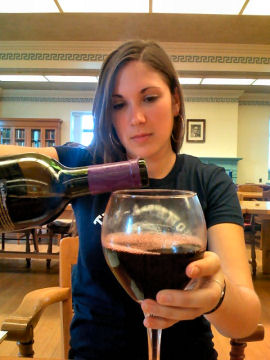 Scientists know that environmental cues like plate size can impact eating behaviors, but the effect of environmental factors on wine consumption has, until now, not been studied in detail.

In a new study, published in Substance Use and Misuse, researchers tested what effect six environmental cues would have on participants who were asked to pour what they considered to be a normal serving of wine.

The researchers, from Iowa State and Cornell University, used three different types of wine glasses to test the effect of size and shape: Large, Wide, or Standard. To see if participants subconsciously drank more when they anticipated a meal, some drinking environments featured a large or small place setting. To examine the effects of pouring position, students either poured their wine into a glass they were holding or into glass placed on a table. And finally, to examine the visual effects of color contrast, there was either low contrast between the wine and the glass (white wine in a clear glass) or high contrast (red wine in a clear glass).

As the researchers suspected, several environmental cues lead to over-pouring. When the glasses were wider (typically for red wine), the participants poured around 12 percent more. "People have trouble assessing volumes," said Iowa State's Laura Smarandescu. "They tend to focus more on the vertical than the horizontal measures. That's why people tend to drink less when they drink from a narrow glass, because they think they're drinking more."

The subjects also poured 12 percent more wine when they were holding their glasses, compared to pouring into glasses placed on a table.

Color also seems to befuddle drinkers, with the subjects pouring 9 percent more white wine than red. The researchers speculate this may be because of the low contrast between the glass and the wine (white wine in a clear glass).

The study notes that the influence of a small and large table setting (suggesting a meal) was not a strong influencing factor.

"If you ask someone how much they drink and they report it in a number of servings, for a self-pour that's just not telling the whole story," said co-researcher Doug Walker, also from Iowa State. "Participants in the study were asked to pour the same amount at each setting, but they just couldn't tell the difference."

For better control of alcohol servings, the researchers suggest that people stick to narrow wine glasses and only pour if the glass is on the table or counter and not in the hand.

Related:
Discuss this article in our forum
Beer-goggles effect explained
Alcohol rewires brain for PTSD
Stabbed or shot? Drink up
Gettin' drunk and fallin' down; who cares?