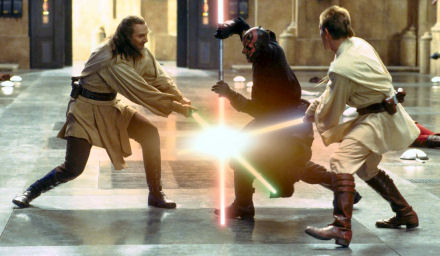 Photons have long been described as massless particles which don't interact with each other, but Harvard and MIT scientists have reported the creation of "photonic molecules" that behave as though they have mass. The researchers, from the Harvard-MIT Center for Ultracold Atoms, say that the photonic molecules represent a never-before-seen form of matter that was, until now, purely theoretical. Lead researchers Mikhail Lukin (Harvard) and Vladan Vuletic (MIT) have detailed their work in the latest issue of Nature.

"It's a photonic interaction that's mediated by the atomic interaction," according to Lukin. "That makes these two photons behave like a molecule, and when they exit the medium they're much more likely to do so together than as single photons."

According to the researchers, the effect does have some practical applications right now. "It feeds into the bigger picture of what we're doing because photons remain the best possible means to carry quantum information," Lukin said. "The handicap, though, has been that photons don't interact with each other."

"What we demonstrate with this process allows us to do that," Lukin said. "Before we make a useful, practical quantum switch or photonic logic gate we have to improve the performance, so it's still at the proof-of-concept level, but this is an important step. The physical principles we've established here are important."

Lukin also suggested that the system might one day even be used to create complex three-dimensional structures wholly out of light. "What it will be useful for we don't know yet, but it's a new state of matter, so we are hopeful that new applications may emerge as we continue to investigate these photonic molecules' properties," he said.