My god, it's full of stars. Astronomers discover densest galaxy 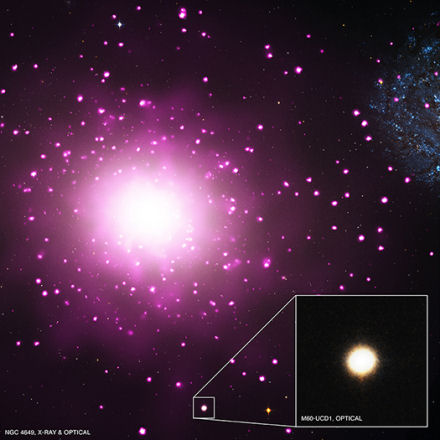 Alpha Centauri, our closest neighboring star lies about 4 light years distant; now imagine as many as 10,000 stars crammed into that relatively small space. Astronomers say that's about the density of the newly discovered ultra-compact dwarf galaxy known as M60-UCD1.

"This galaxy is more massive than any ultra-compact dwarfs of comparable size," said Jay Strader, the Michigan State University scientist who led the discovery. "And [M60-UCD1] is arguably the densest galaxy known in the local universe."

M60-UCD1 was found in what's known as the Virgo cluster of galaxies, a collection of galaxies located about 54 million light years from our own Milky Way. Until recently, astronomers assumed dwarf galaxies were either single stars or very-distant galaxies.

What makes it so remarkable is that about half of its mass is found within a radius of only about 80 light years. This would make the density of stars about 15,000 times greater than found in Earth's neighborhood in the Milky Way.

"Traveling from one star to another would be a lot easier in M60-UCD1 than it is in our galaxy," Strader said. "Since the stars are so much closer in this galaxy, it would take just a fraction of the time."

The galaxy was discovered using NASA's Hubble Space Telescope with follow-up observations performed by NASA's Chandra X-ray Observatory and ground-based optical telescopes. The 6.5-meter Multiple Mirror Telescope in Arizona was used to study the amount of elements heavier than hydrogen and helium in stars in M60-UCD1. The values were found to be similar to our Sun. "The abundance of heavy elements in this galaxy makes it a fertile environment for planets and, potentially, life to form," said co-discoverer Anil Seth, of the University of Utah.

Related:
Discuss this article in our forum
New Neptunian moon discovered by Hubble
Nearby star may have 3 habitable planets
Earth's Milky Way neighborhood gets upsized
First discovery of ET life will likely be around a white dwarf star, say astrophysicists